Endoscopic Thoracic Sympathectomy (ETS) has been performed at Osler for over 20 years. The biggest challenge in surgical treatment for hyperhidrosis is not the technical aspect of the surgery, but the decision algorithm when considering surgery. As many patients are desperately seeking a cure for their debilitating symptoms, physicians can easily get caught up in their patients’ enthusiasm. This can result in an inappropriate decision to operate on this very vulnerable group of patients.

To ensure outstanding outcomes, we strictly abide by our unique Hyperhidrosis Treatment Algorithm, which includes all the viable options for our patients, including ETS, thermolysis, Botox, oral and topical medication.

ETS was first used in 1889 to treat epilepsy and peripheral vascular disease. However, currently, the main indication is for the treatment of focal hypherhidrosis.

At Osler, the diagnosis of hyperhidrosis is not made using a specific diagnostic test. Instead, we subjectively assess the patient’s history. If patients are complaining of a sudden triggering of sweat in their hands, underarms, or feet, which cannot be controlled, and impacts the quality of their life, they can be diagnosed as having focal hyperhidrosis. It is critical to differentiate focal from generalized hypherhidrosis as the treatment algorithm is very different.

We currently use the Hyperhidrosis Severity Score (Solish et al.) to quantify a patient’s symptoms. This score classifies symptoms into 4 categories:

Typically, surgical intervention for focal hyperhidrosis is considered only in those with a score of 3 or 4.

There are two types of sweat glands: apocrine glands that produce the odor, and eccrine which are more common and are responsible for thermal regulation.

Eccrine glands are most dense in the palmar, axillary, and plantar areas. Evaporation from the sweat is the most effective way to dissipate heat produced by the body and is therefore our body’s best way to maintain its temperature.

Understanding the Cause of Hyperhidrosis

Understanding the Cause of Hyperhidrosis

We have seen a strong family clustering for hyperhidrosis, suggesting a genetic component. In fact, at Osler, we have operated on many children brought to our clinic by parents who endured disabling symptoms themselves.  The pathophysiology is not fully understood however a neural regulation malfunction is thought to be the culprit. A hyperactive sympathetic system that cannot be controlled by central thermoregulatory neurons in the hypothalamus appears to be the most likely etiology.

When evaluating a patient with palmar hyperhidrosis, the physician relies on the patient’s description of the symptoms. Typical symptoms that respond well to ETS include:

Our algorithm for the treatment for axillary hyperhidrosis has evolved significantly over the past few years as a new and innovative non-surgical options has become available.

We have found that results of ETS for axillary hyperhidrosis are not as good as for palmar hyperhidrosis. There appears to be a slightly higher recurrence rate, and a higher incidence of compensatory hypherhidrosis.

There are very few contraindications for ETS. It is critical that the patient fully understand all their options, including Botox, iontophoresis, and topical and oral medications. An informed consent is a critical part of a physician’s duty, as side effects like compensatory hyperhidrosis have to be clearly described.

For patients with axillary hyperhidrosis, we are cautious with patients whose main complaint is odour, as little improvement can be offered with ETS. 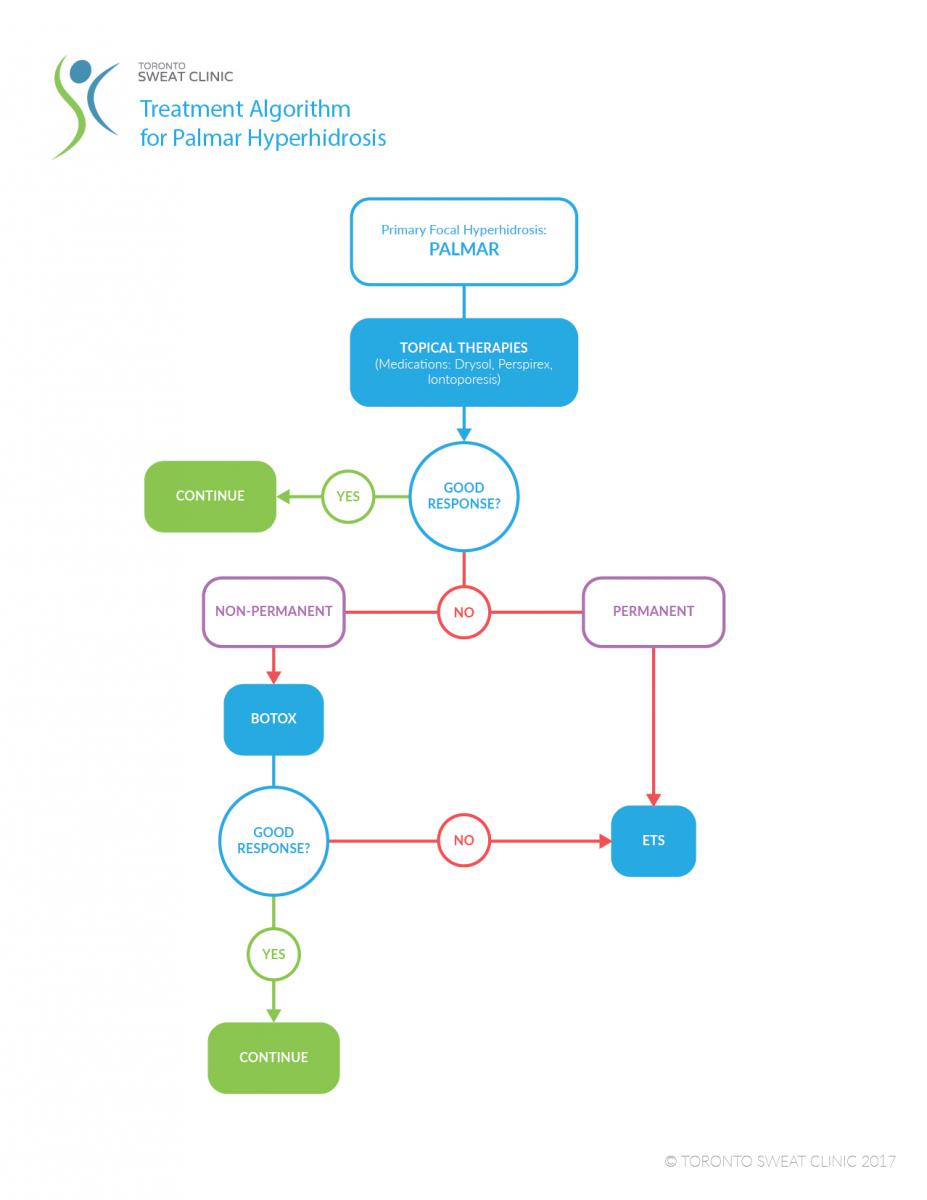 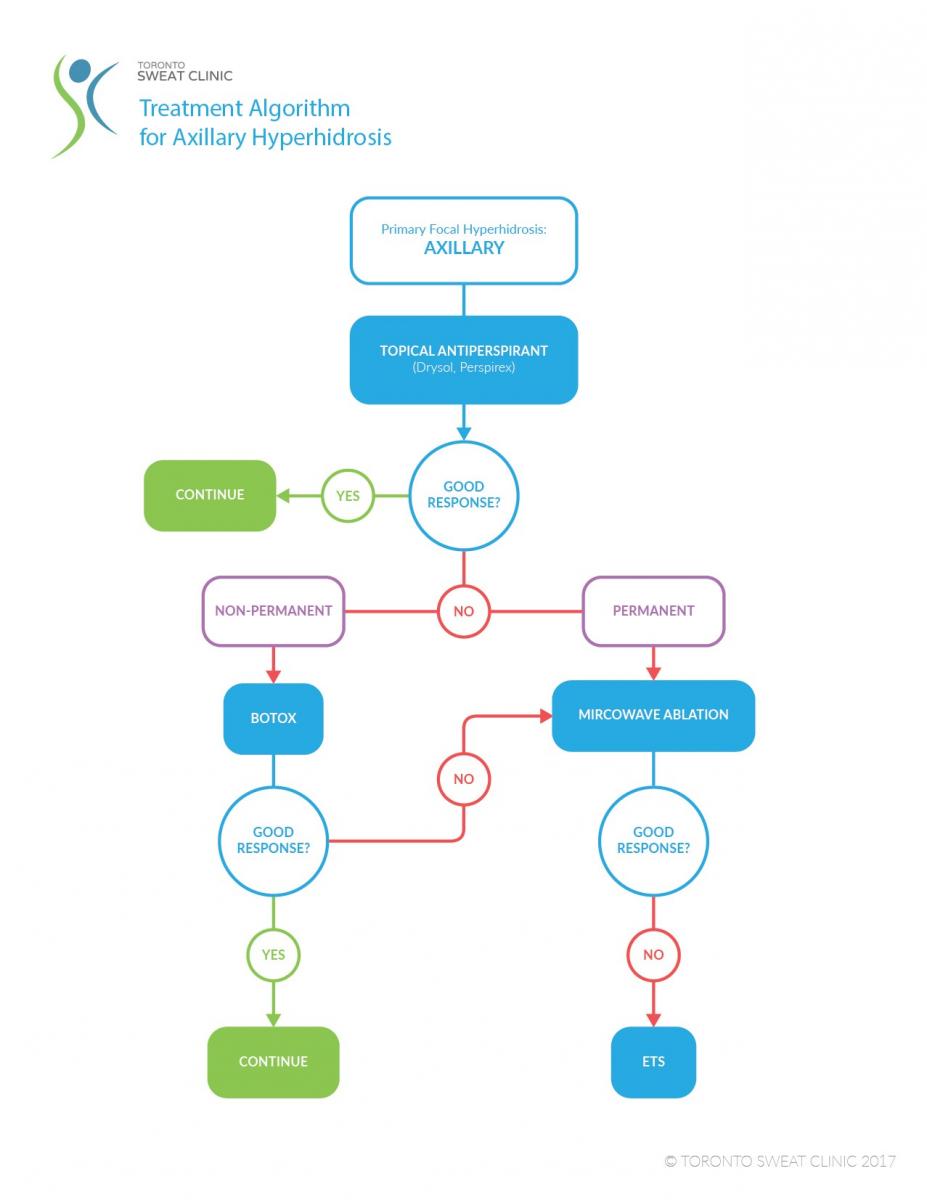 We feel this is the most critical part of the pathway. A poorly screened patient may suffer from irreparable harm, resulting in lifelong side-effects.

Be very cautious and possibly avoid operating on: 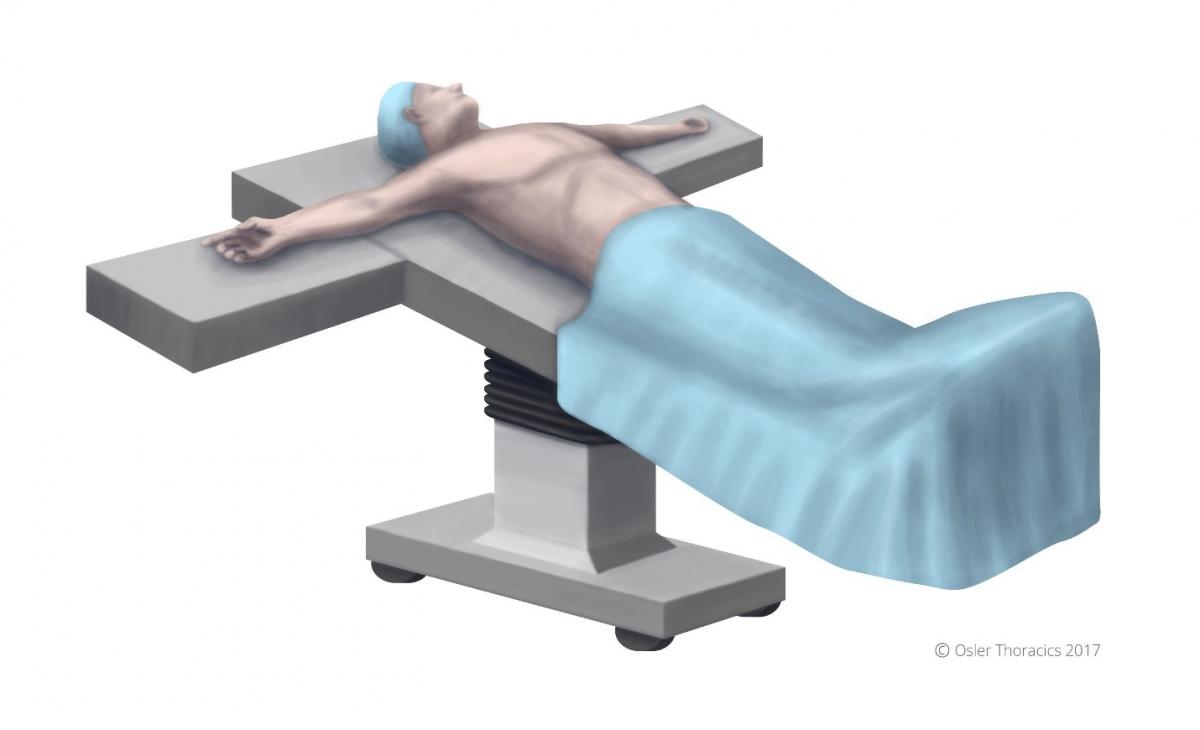 The patient is positioned supine, in steep reverse Trendelenburg. This will optimize exposure of the superior sulcus. The arms are abducted slightly less than 90°, and a footboard is placed to prevent the patient from sliding off the bed.

Airway management: For patients with axillary hyperhidrosis we typically place a double lumen endotracheal tube to improve exposure of the T5 ganglion. Otherwise, we use a standard single lumen ETT with insufflation. 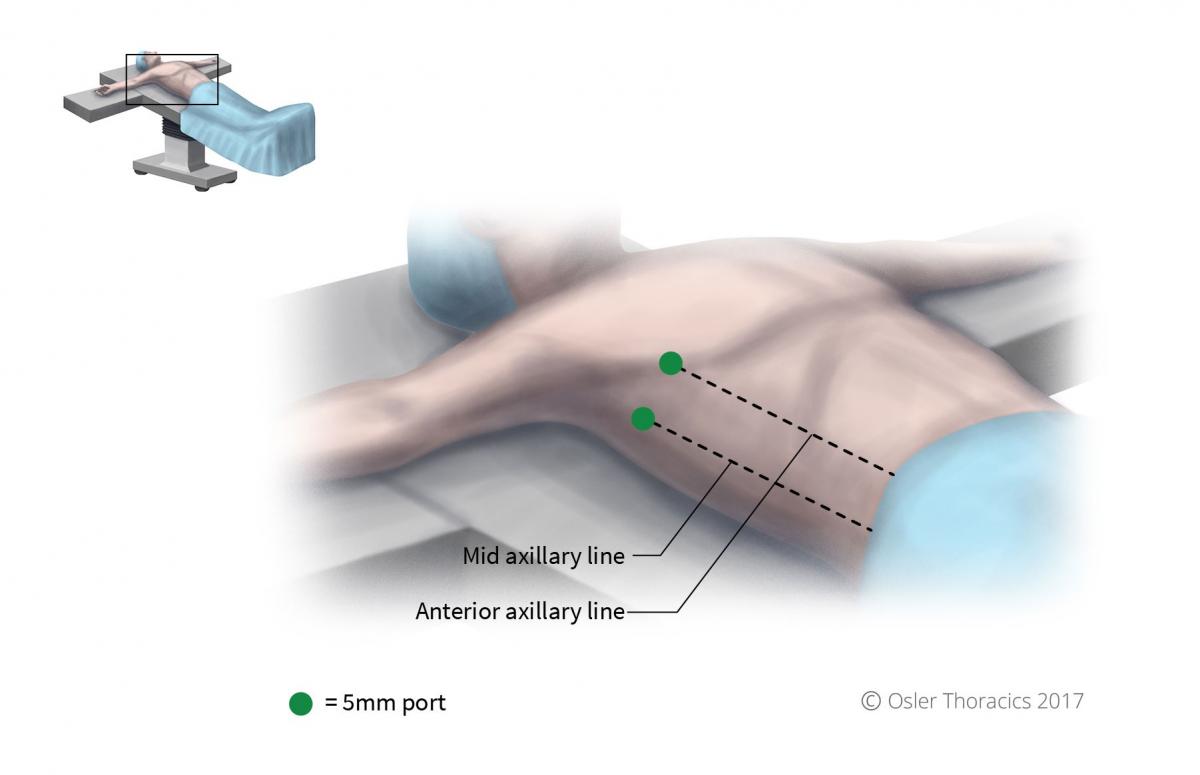 Pearl #2: Location of Sympathetic Interruption (all charts to be made into downloadable PDFs) 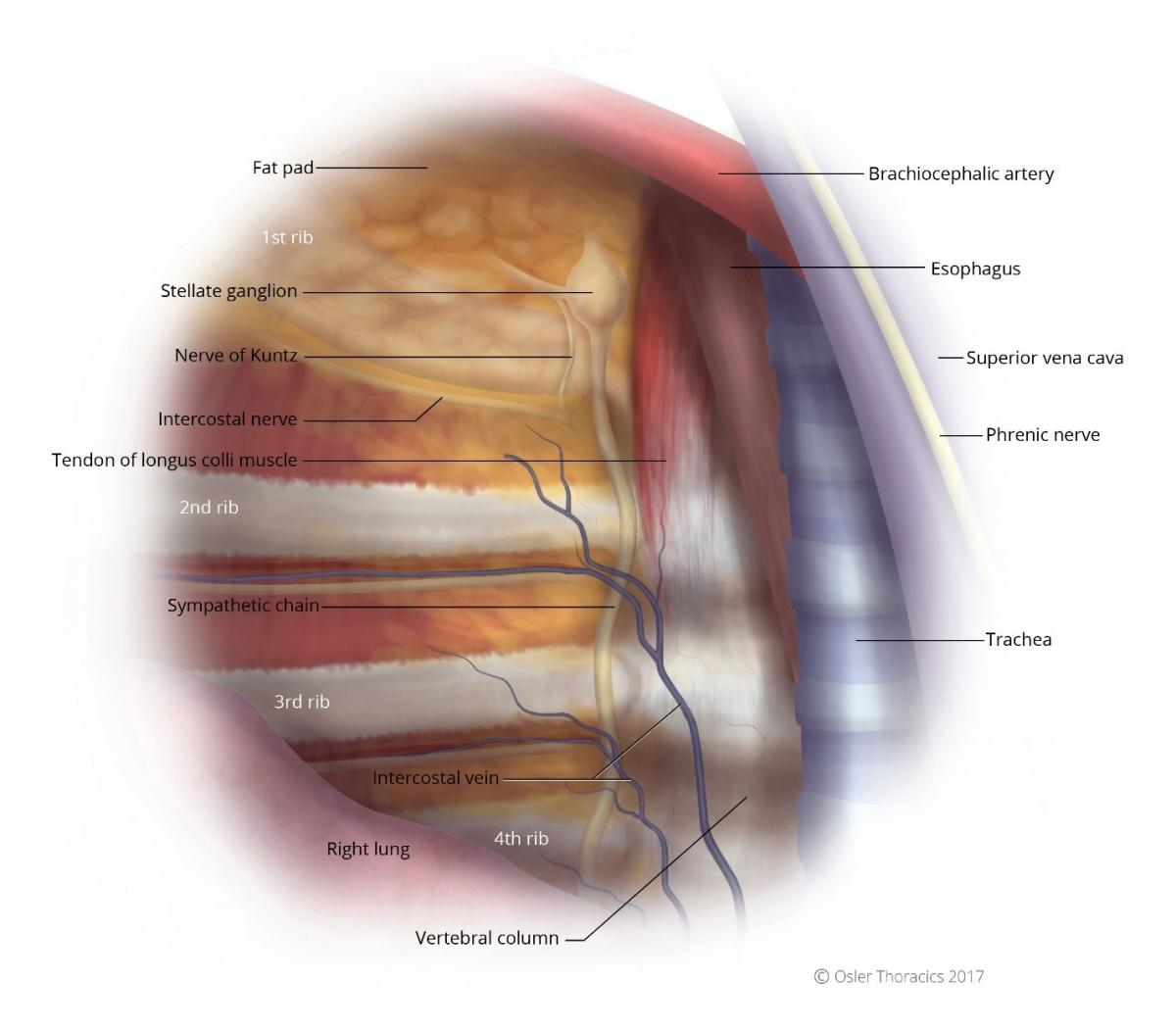 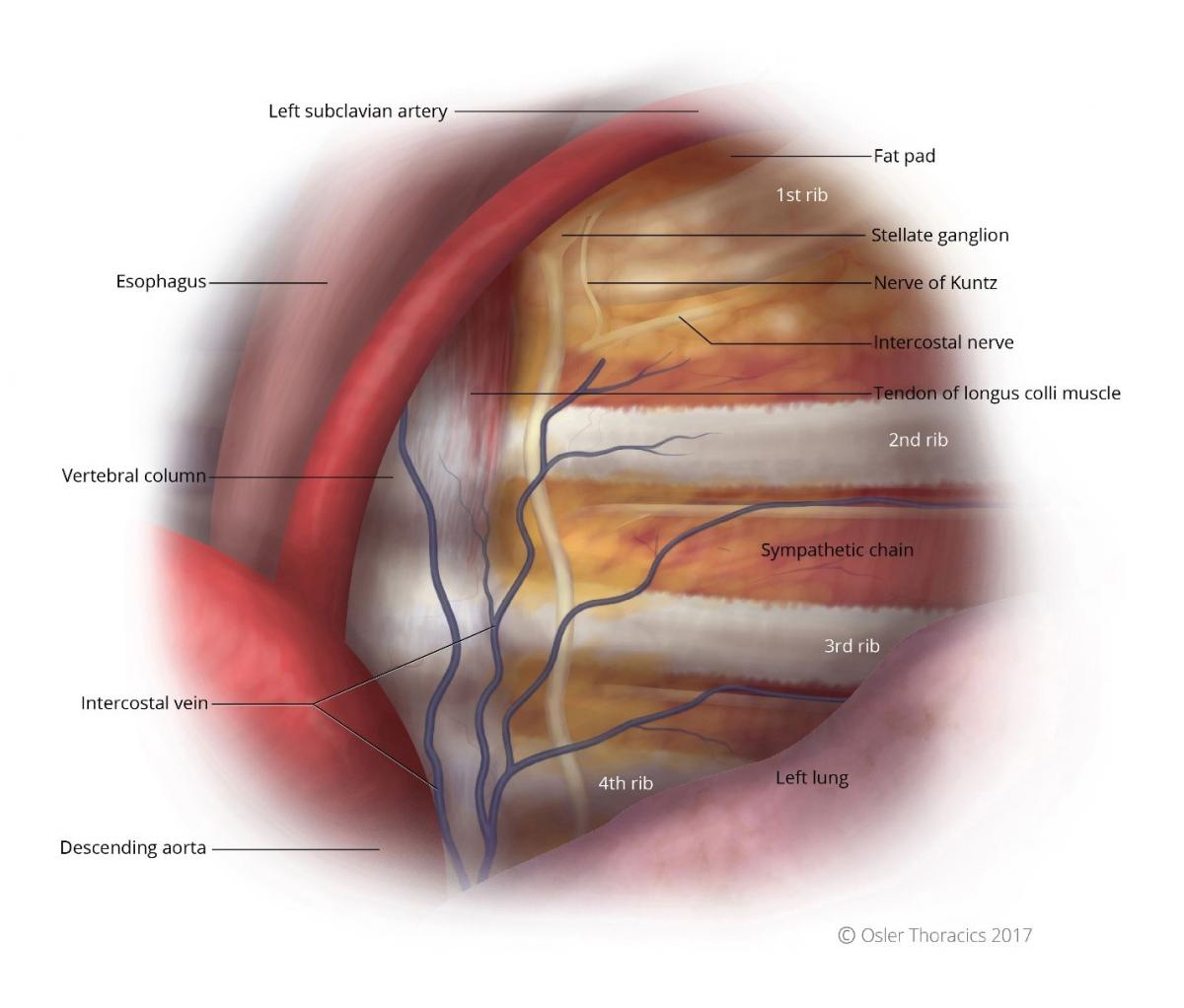 The sympathetic chain is a white cord that runs parallel to the vertebral body, underneath the parietal pleura, and anterior to the costo-vertebral joint (see figures 3 and 4). Slightly more medial to the chain is a tendon with similar thickness and colour as that of the sympathetic nerve. This has been shown by Singh et al. to be responsible for surgical failures.

Pearl #5: Ablate the Nerve of Kuntz

The Nerve of Kuntz is an ascending rami between the second and first intercostal nerve that provides an alternative pathway for post-ganglionic fibers to reach the brachial plexus. It is surprisingly common, located 1-2 cm parallel to the sympathetic chain and the R2 and R1 level (see figures 3 and 4). Failure to identify and cauterize this aberrant nerve may lead to surgical failure.

A successful ETS requires a clear view of the superior mediastinum and of the sympathetic nerve and ganglia in relation to the costal heads posteriorly, the subclavian artery superiorly, and (on the right side) the superior vena cava medially and the azygous vein inferiorly. The presence of a congenital mesoazygous web—which suspends the azygous vein and splits off an azygous lobe of the lung—can completely obscure the view of the superior sulcus that is necessary for a successful sympathectomy procedure.

The web can obscure the sympathetic nerve especially around T3. In most cases the nerve can be seen laterally to the takeoff of the web, however in some cases the nerve may be completely obscured. In these cases reflection of the web with control of the suspended azygous vein may be necessary. 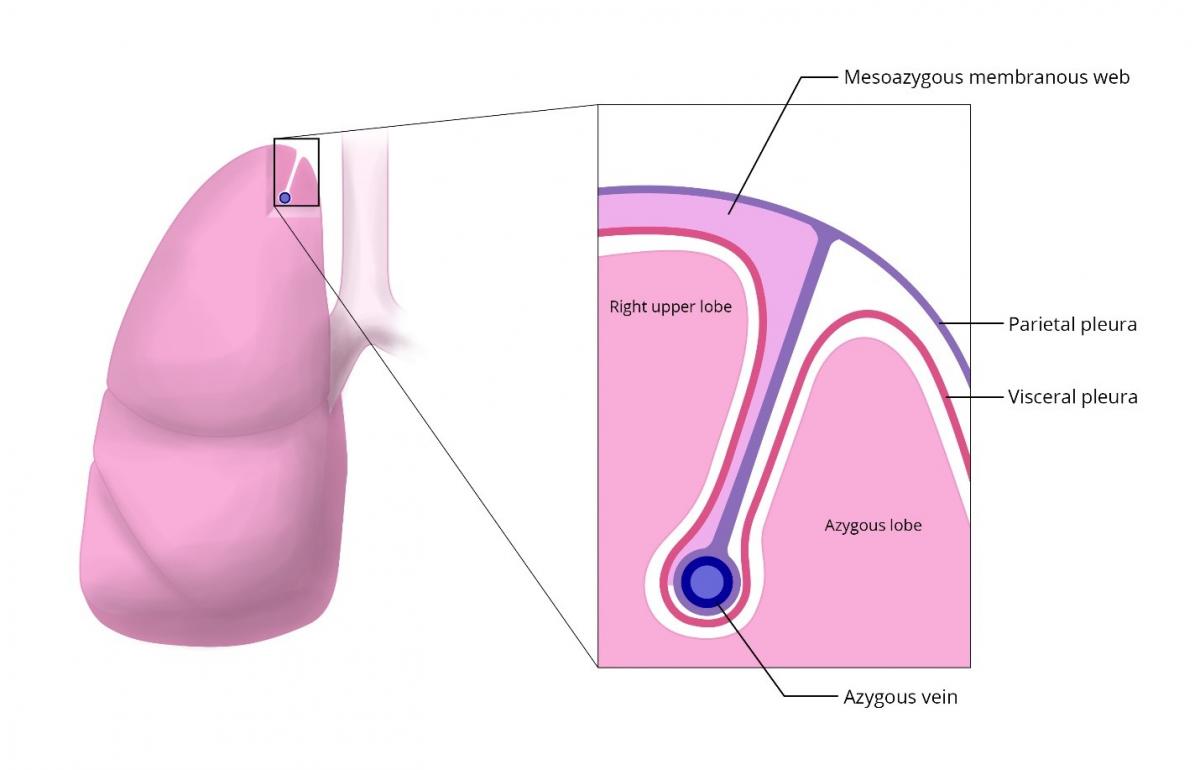 Figure 5: The azygous lobe is formed by the mesoazygous membranous web.

In a study by Lin et al., there appeared to be no difference in success rates when comparing patients who underwent sympathetic nerve clipping compared to cutting. Coelho et al., produced similar results, showing no differences in success rates, compensatory hyperhidrosis. 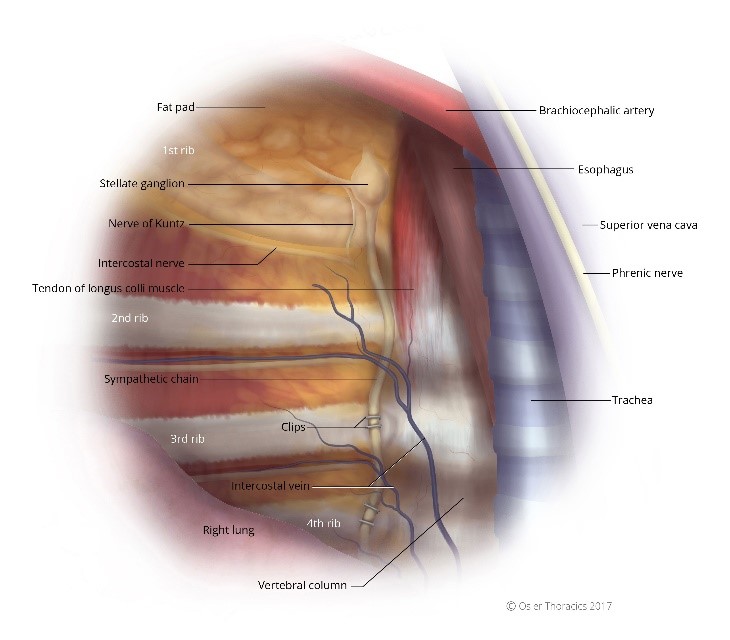 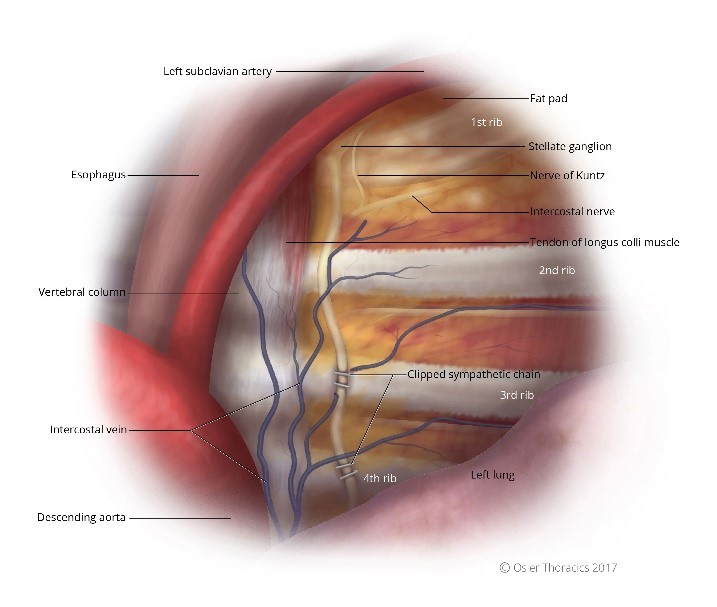 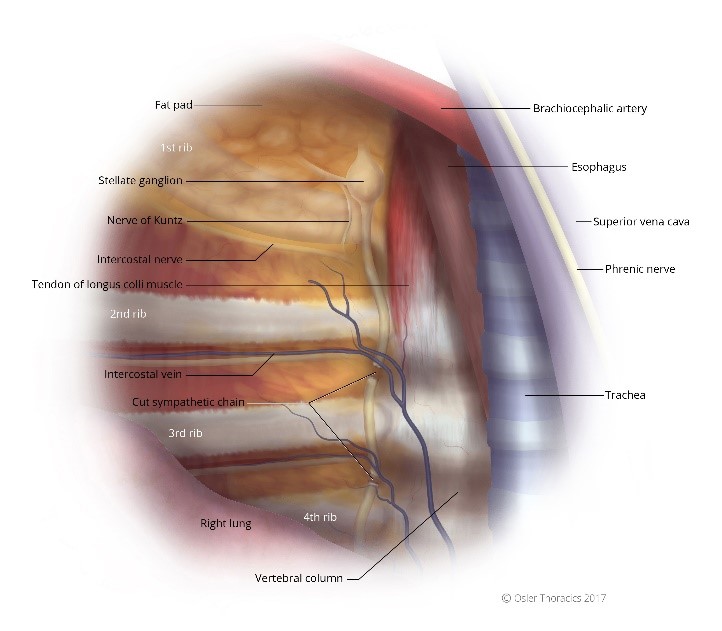 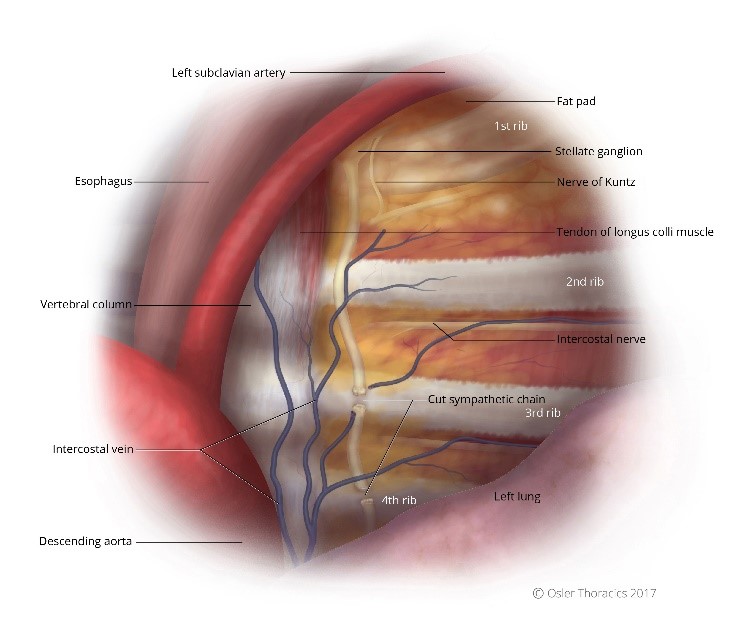 In 2014, Panhofer et al. compared clipping at cutting at R4/R5, finding that clipping was less effective but interestingly resulted in decreased rates of compensatory hyperhidrosis.

At Osler, we feel that clipping provides a false sense of security, inappropriately promising reversibility if compensatory hyperhidrosis is too severe. This may soften stringent physician screening for ETS, resulting in an increase rate of poor outcomes. At Osler, we tell patients that clipping the sympathetic nerve should be considered permanent with no clear evidence of reversibility. We believe that the only true window of reversibility is within four weeks of the procedure. As we are very careful in choosing our surgical patients, we recommend sympathectomy over clipping as we feel the clinical results are superior.

It is critical to discuss all non-surgical options prior to consenting the patient for surgery. These include:

We all recognize the risk of compensatory hyperhidrosis after VATS sympathectomy. However, less common side effects should be also discussed to ensure your patient is properly educated prior to proceeding with surgery.

Papa et al. studied the effect of sympathectomy on resting heart rate and systolic blood pressure. At 30 days and 2-year follow-up, both variables were reduced, similar to the effects of beta-blockers. Others have demonstrated a similar response, however, with no impairment of exercise capacity or cardiorespiratory response to exercise.

This response is likely secondary to the division of small nerve fibers that provide autonomic sympathetic innervation to the cardiovascular system.

As the level of sympathetic nerve disruption is no longer T2, the risk of Horner’s syndrome has dropped dramatically. After performing well over 1200 ETS procedures we have not had a single occurrence of Horner’s syndrome. Patients who suffer from this complication complain of drooping of the upper eyelids, constriction of the pupils, and dryness of the eyes. Although exceedingly rare, it should be discussed with your patients.

Gustatory sweating is another side effect which occurs in about 5% of cases. This condition, in which patients notice that they tend to experience increased sweating while eating or smelling certain foods, develops in rare instances.

Typically, patients will complain of sweating over their lip when they eat spicy foods.

A short time after the operation, 3 to 4 days, approximately 5 % of patients will complain of a temporary recurrence of their palmar hyperhidrosis. Although this is a short-lived phenomenon that may last 1-3 days, they must be informed about this possibility as it may lead to panic and doubt.

Many patients also complain of “Phantom Hypherhidrosis”. They describe a sensation of impending palmar hyperhidrosis, however the sweat never develops. This phenomenon tends to dissipate over a few months.

Redness in the face can be more disabling than hyperhidrosis. When flushing is easily triggered, patients tend to avoid social interaction leading to social phobias, depression and anxiety.

We have found those that present with facial flushing are frequently tearful during consultation and are desperate for a “cure”. It is therefore very critical to exhaust all non-surgical options prior to ETS. Surgery for flushing has more severe compensatory hyperhidrosis when compared to those with hyperhidrosis. Patient satisfaction with the outcome of surgery also decreases with time.

Consider SSRIs to reduce flushing and social anxiety. Beta blockers have also been use with success. Topical NSAIDs to treat the flushing can also be considered.

Many patients have already attempted this prior to a consultation with a thoracic surgeon.

Communicate the risk of severe compensatory hyperhidrosis and Horner’s syndrome:

As the sympathetic nerve is clamped at T2, the risk of injury to the stellate ganglion is real. Also, the higher you interrupt the chain, the higher the severity and frequency of compensatory hypherhidrosis. We have also noticed that the risk of gustatory hypherhdrosis is higher in this cohort of patients.

Although ETS is a simple technical procedure, the decision to operate represents the most difficult challenge for thoracic surgeons.

Patients drive this part of a surgeon’s practice, frequently requesting the referral from their family doctor. They present to the office emotionally charged, and ready to commit to surgery. However, the onus is on the surgeon to carefully weigh the pros and cons of ETS, especially since the side-effect of a poorly selected patient can be devastating.

In properly chosen patients, ETS can change the course of their lives. They can become more engaged socially and professionally. Surprisingly, they are frequently more grateful to you than many of your oncology patients.