This will relieve patient symptoms, and should eliminate the risk of catastrophic complications. Although we feel that the risk of gastric strangulation from acute volvulus has been over-stated in the literature, if it occurs the mortality is very high. Performed electively, and at an experienced center, a laparoscopic hiatus hernia repair is safe with excellent long term symptom control.

Massive hiatus hernia repairs are technically very challenging. As quality of life is the main indication for repair, a poor outcome can have profound and long-term repercussions for the patient.

At Osler, prior to any surgical intervention for a hiatus hernia, the following tests are performed: 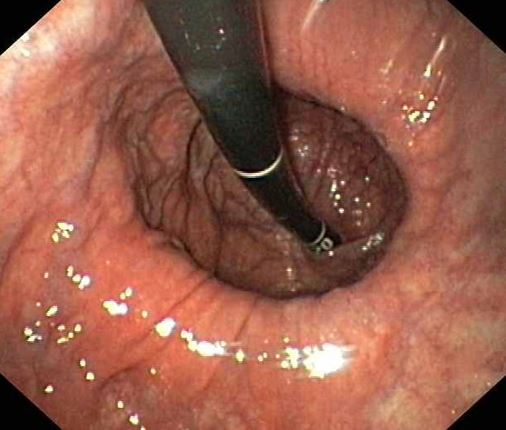 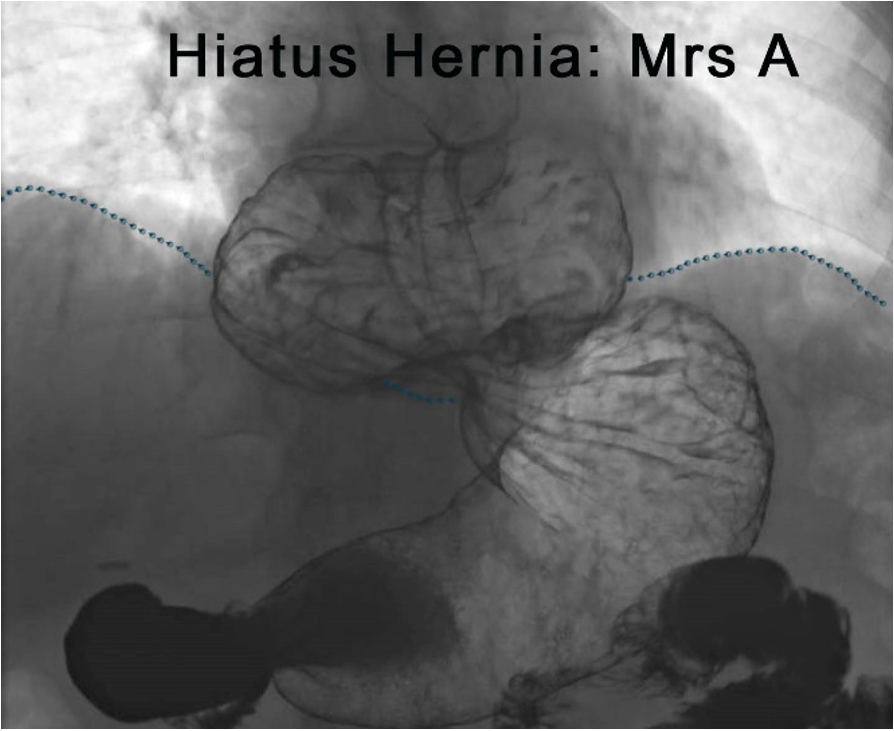 Figure 2: An example of a barium swallow image in a patient with hiatus hernia 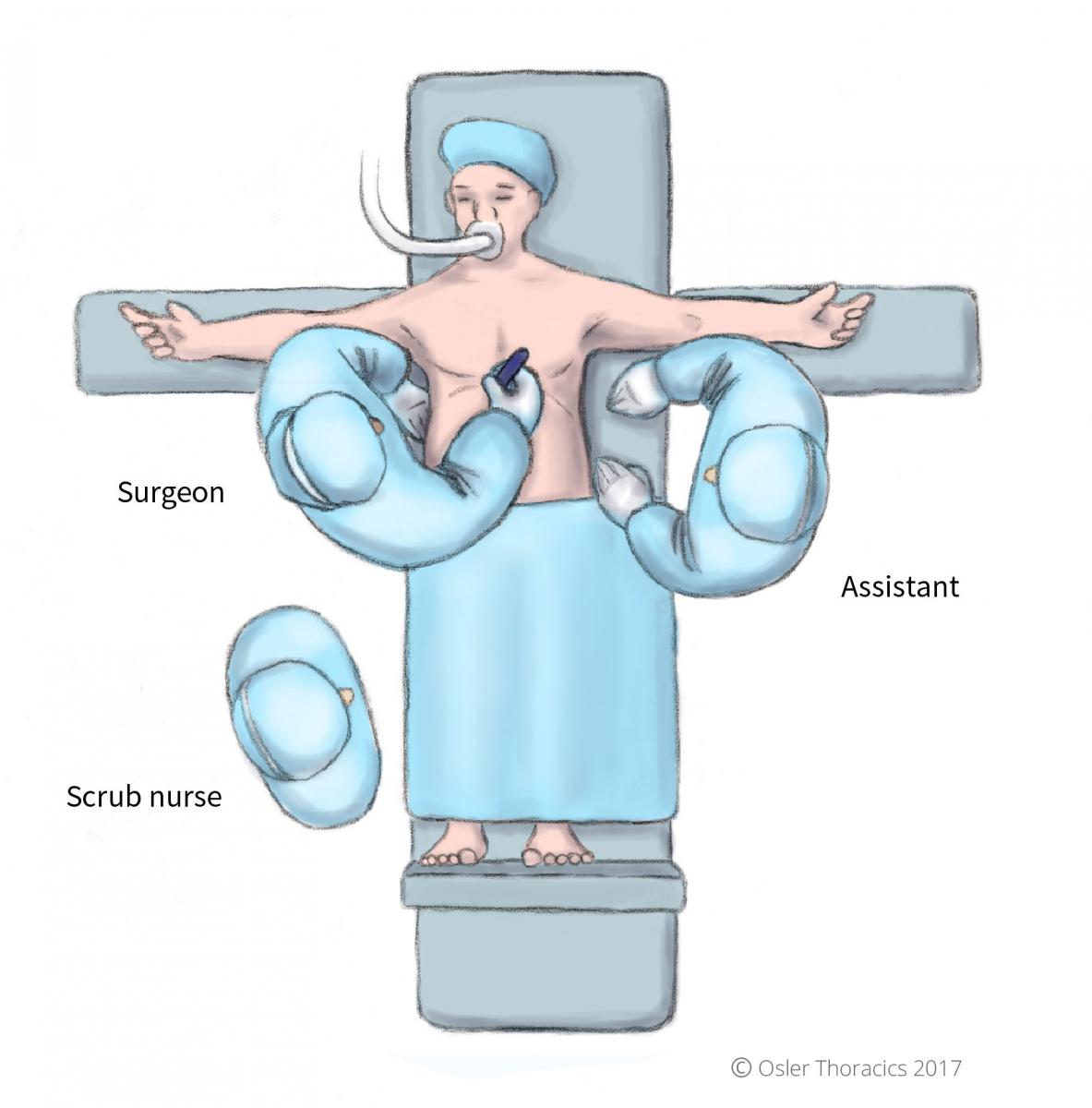 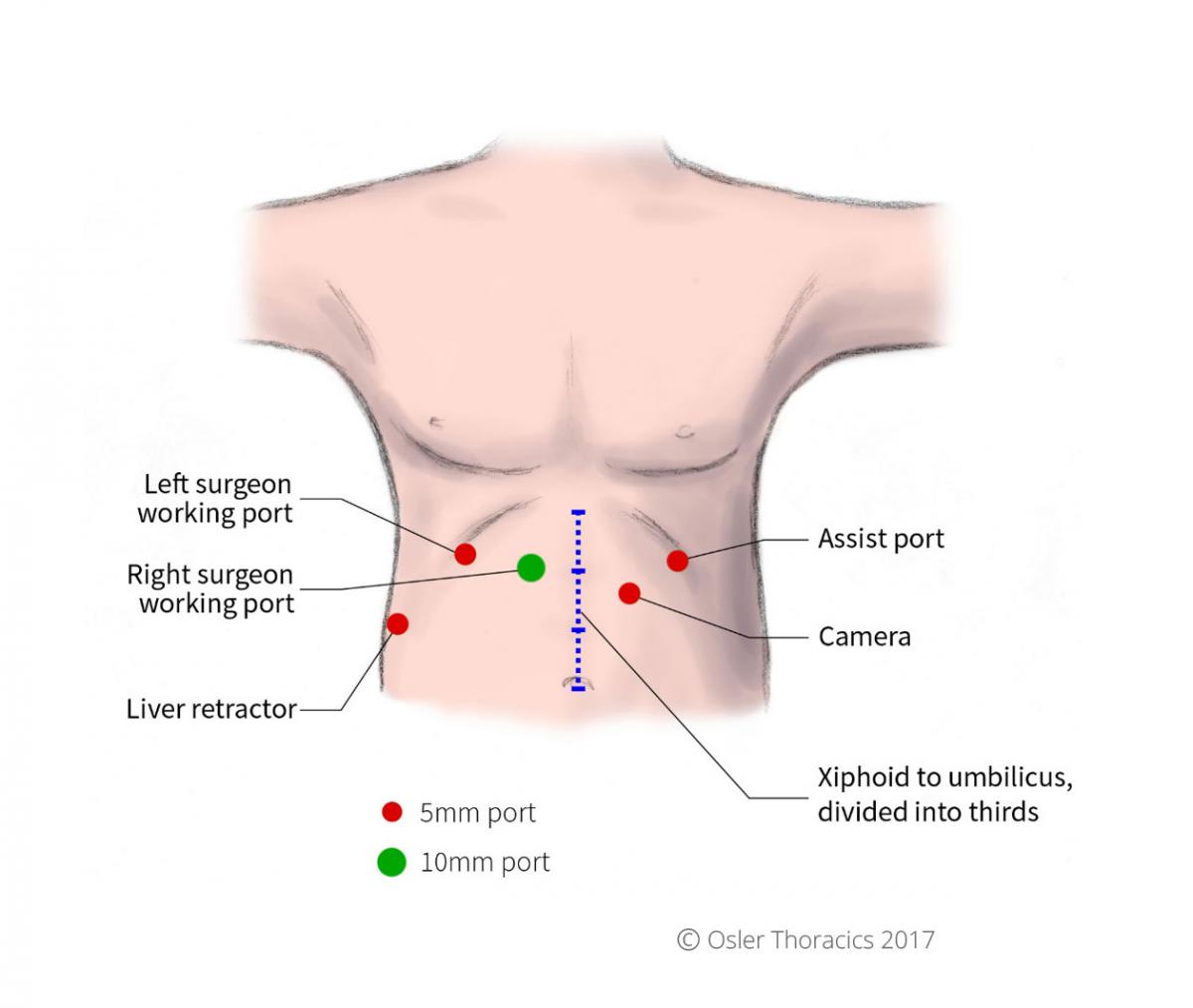 After exposing the hiatus, the herniated stomach is reduced into the abdomen using atraumatic graspers. Minimal manipulation of the stomach is suggested as a chronically herniated stomach may be more susceptible to traumatic injury. Frequently with insufflation and reverse Trendelenburg, a good part of the stomach spontaneously reduces into the abdomen.

As the first step in a successful repair, it is also the most critical part of the entire operation. This step can be performed without touching the stomach, and once complete will have reduced a lot of the mediastinal pull on the stomach. As the hernia sac also contains the peritoneal lining of the gastric cardia, reduction of the sac will also reduce the stomach. 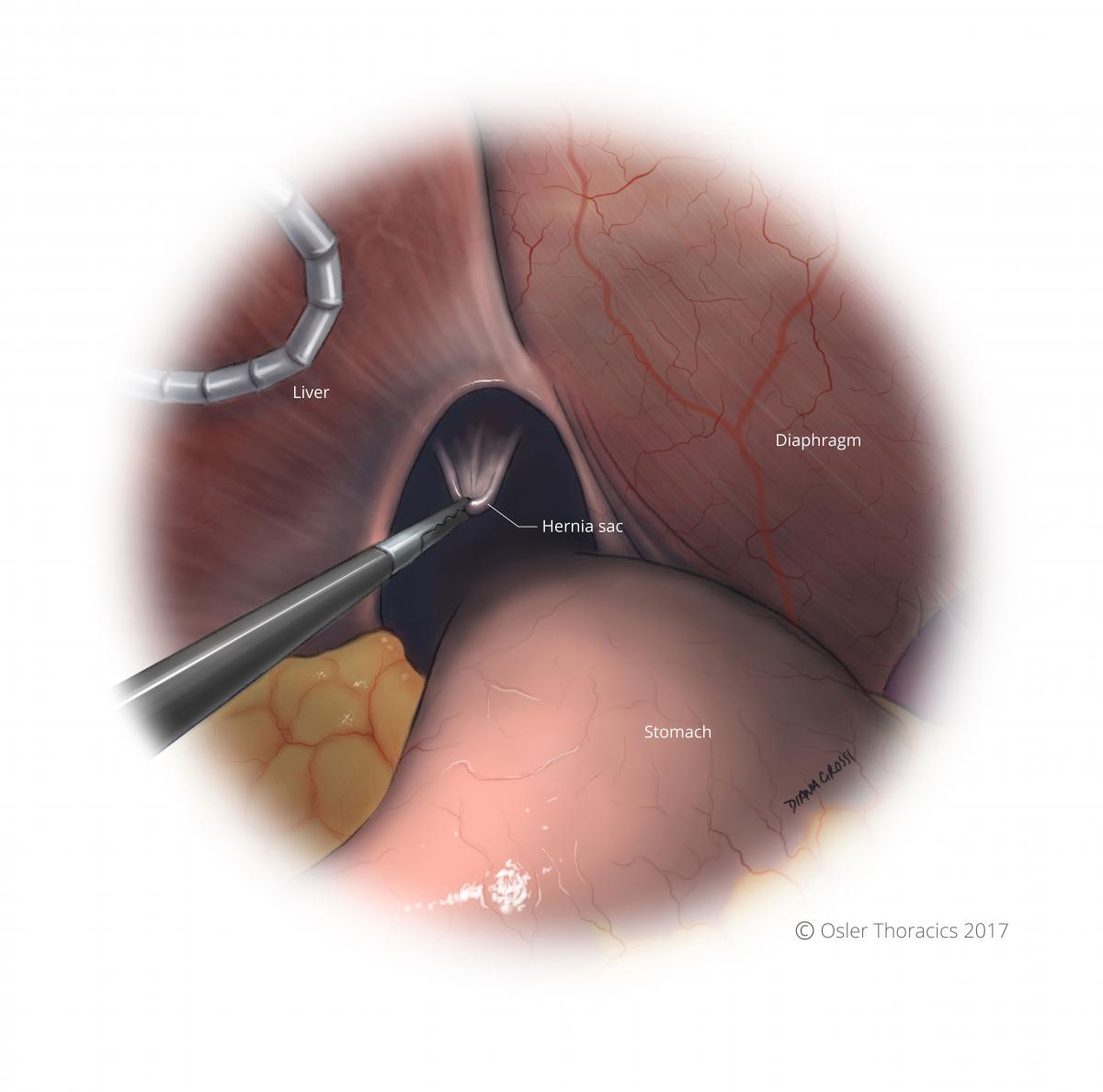 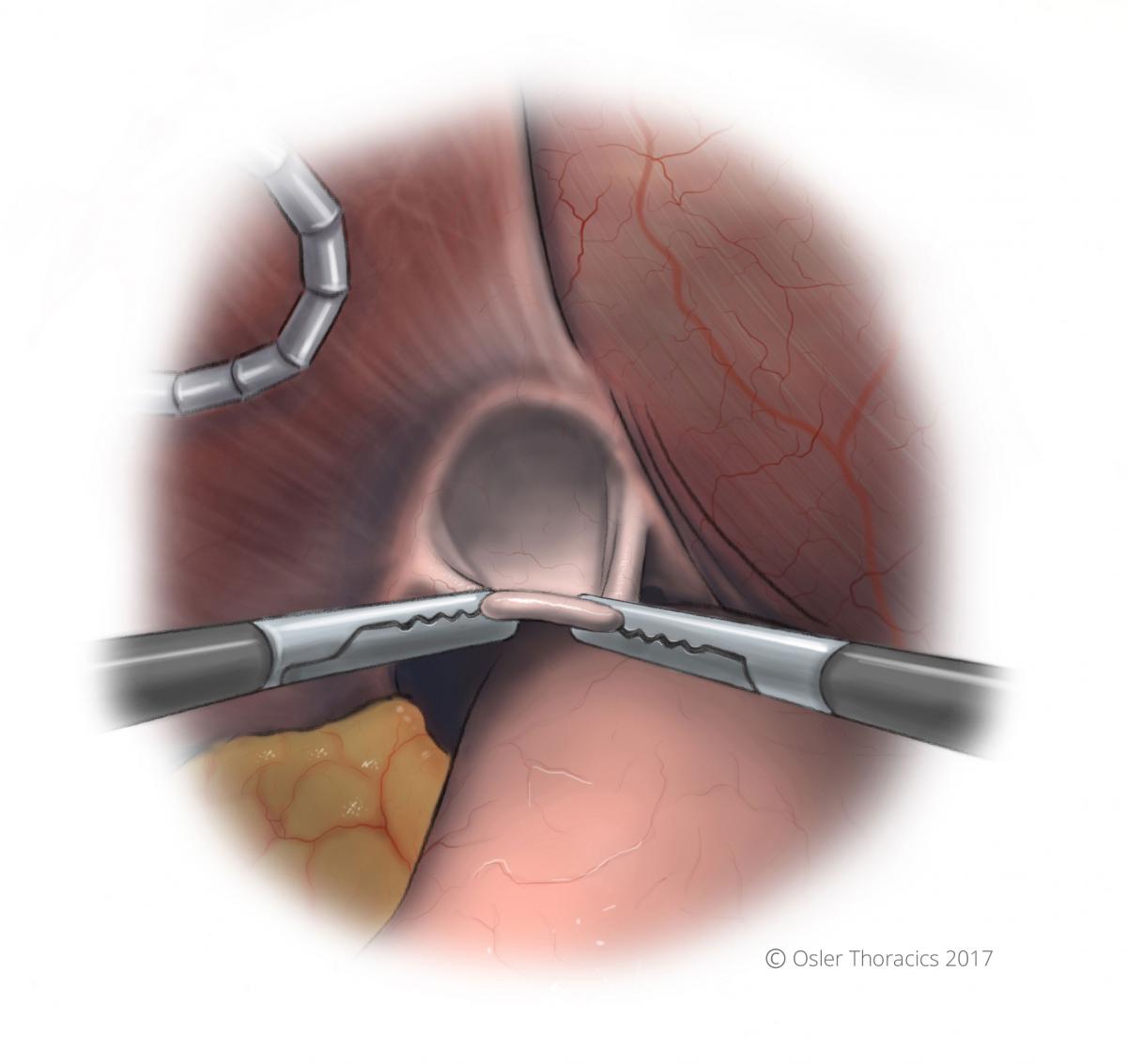 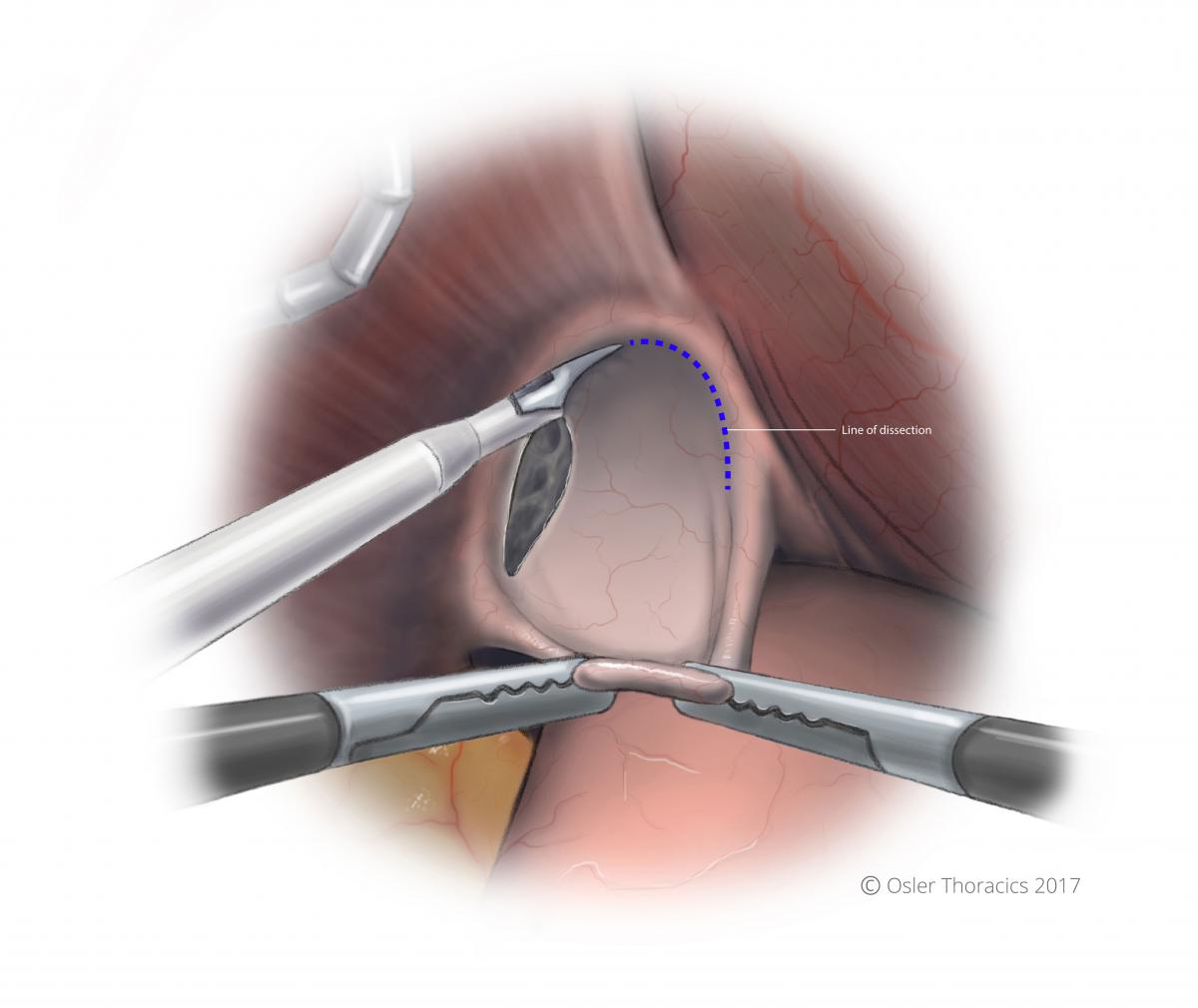 Figure 7: A line of dissection is created 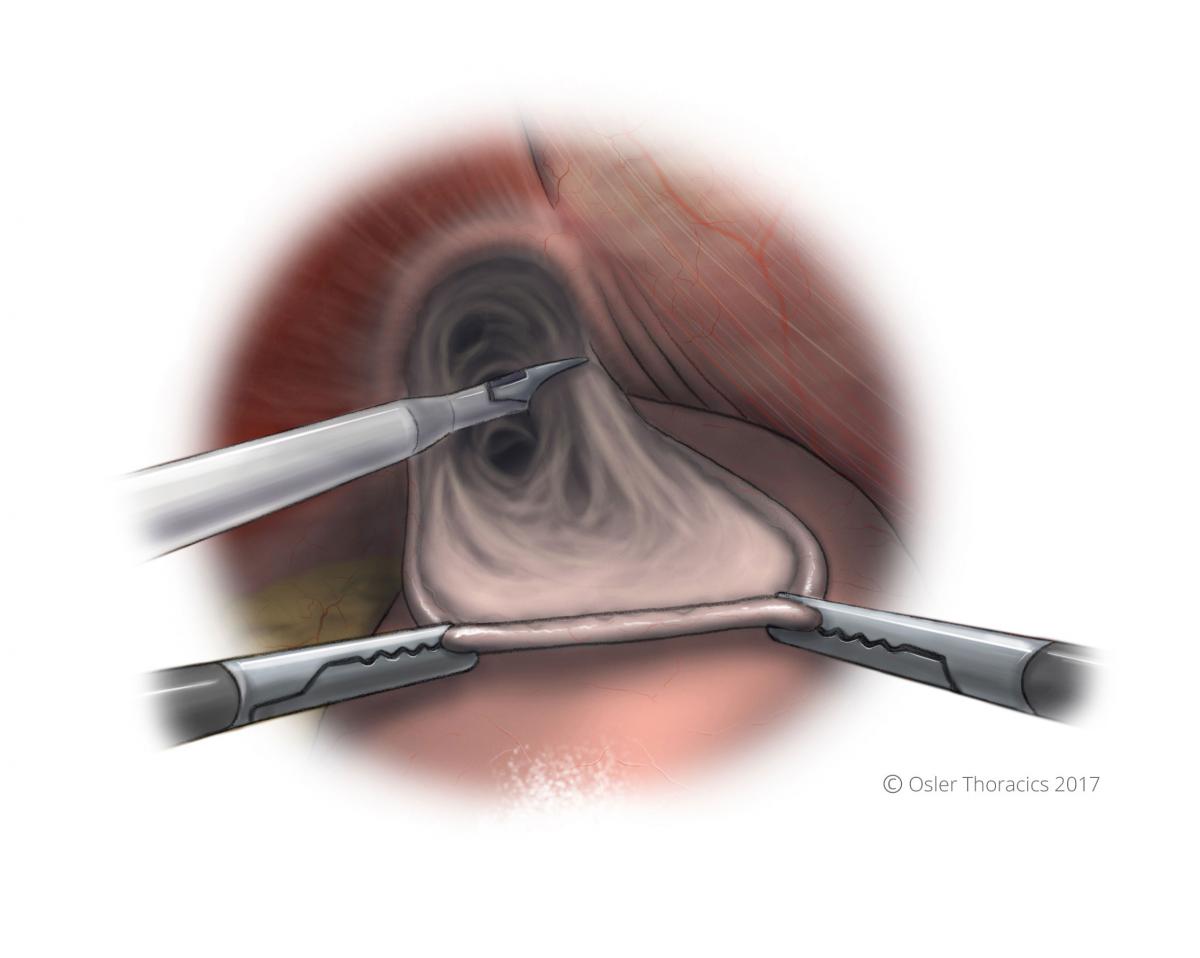 Figure 8: Line of dissection is continued and maintained in the avascular plane between the hernia sac and pericardium

Still without manipulating the herniated stomach, the majority of the sac is pulled out of the mediastinum using the Rollout approach: 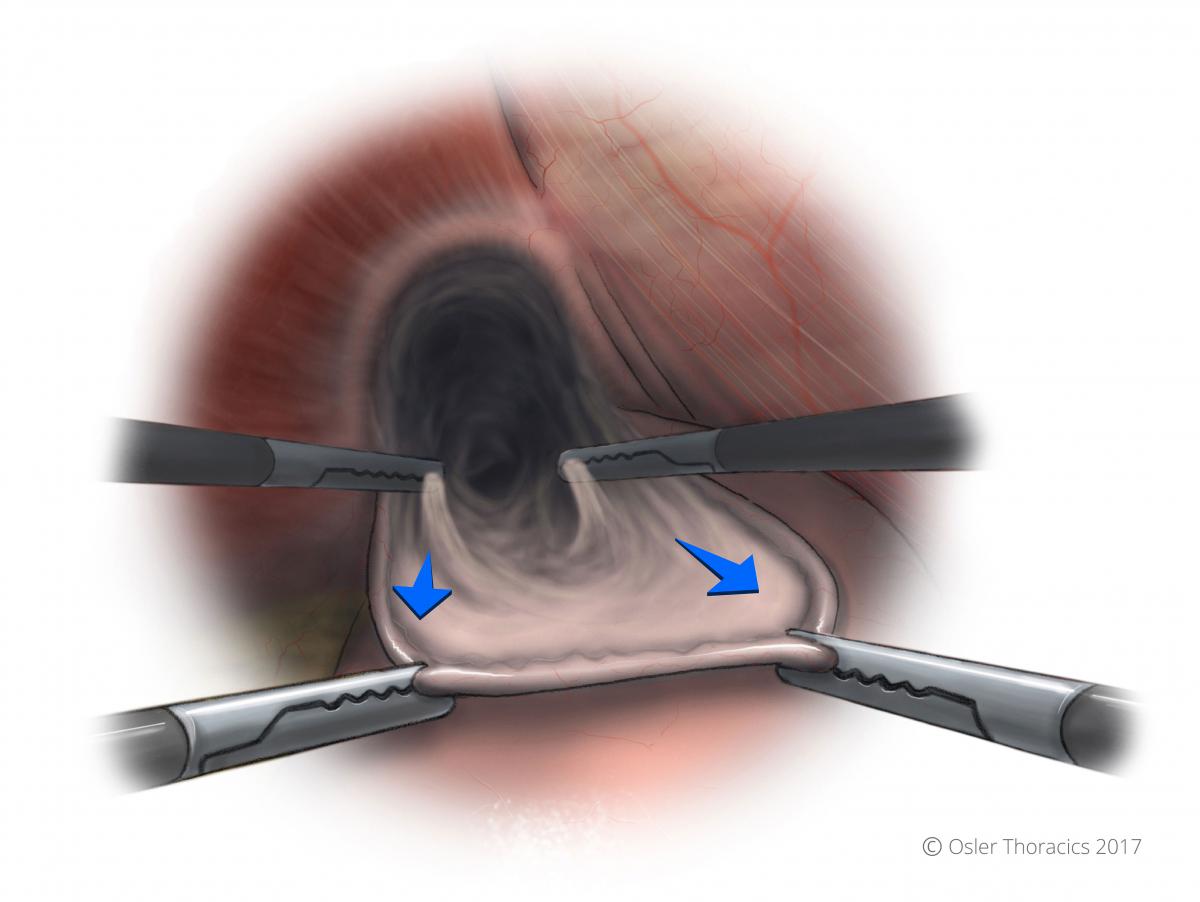 Figure 9: Two-point grasping is used for the sac rollout 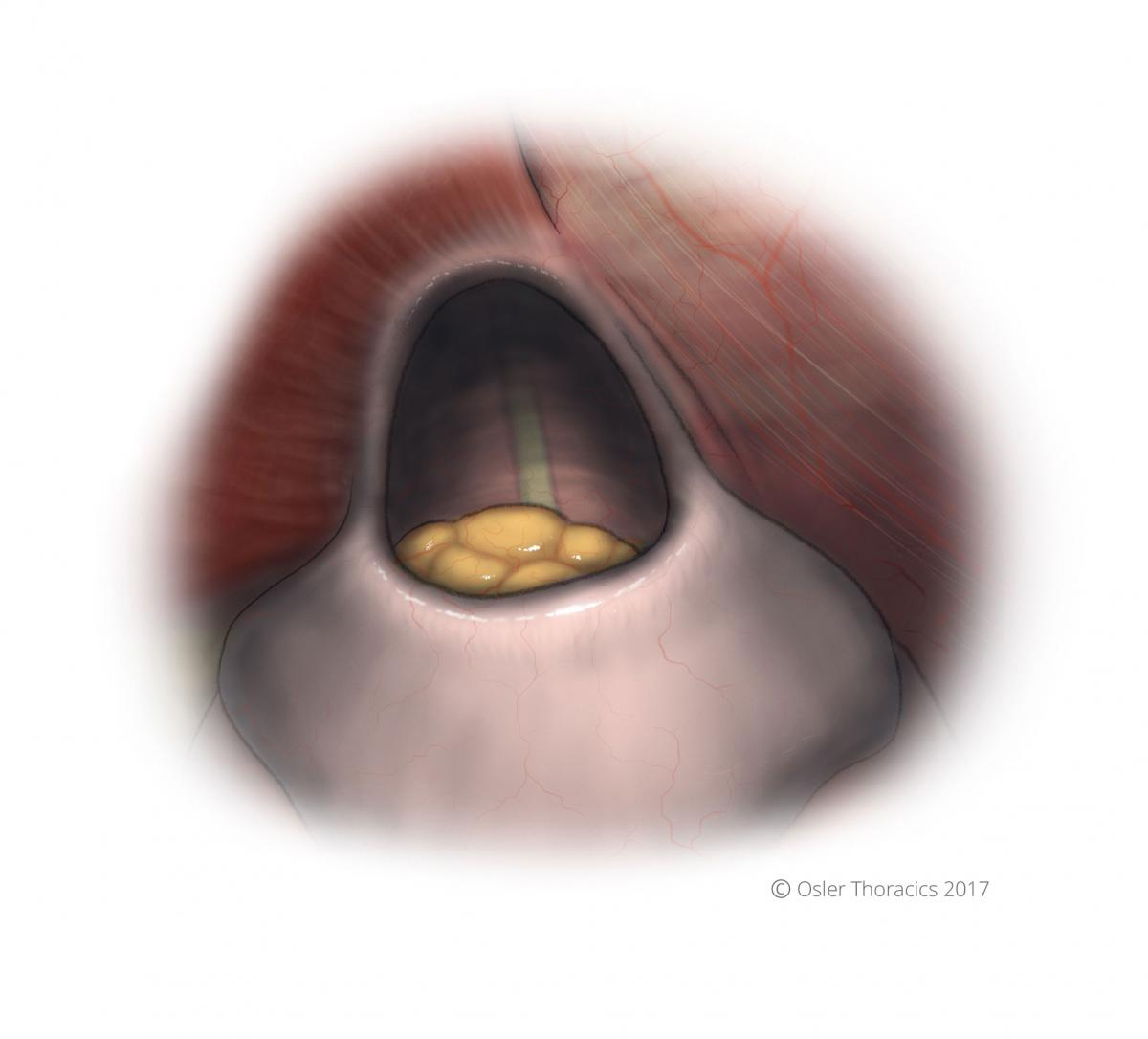 Once the anterior sac is mobilized, the right crura can be mobilized. It is critical to preserve the peritoneal lining of the crurae, as it can strengthen the closure. As much of the left crura is mobilized prior to proceeding to Step 4. Disrupted peritoneal integrity over the crurae can lead to early dehiscence.

In patients with large hiatus hernias, the short gastrics are lengthened, and the fibrofatty tissue harboring them is thickened. In fact, occasionally the edge of the gastric wall is difficult to visualize, increasing the risk of gastric injury.

Once the left and right crurae are mobilized, the posterior part of the hernia sac can be dissected out of the mediastinum. 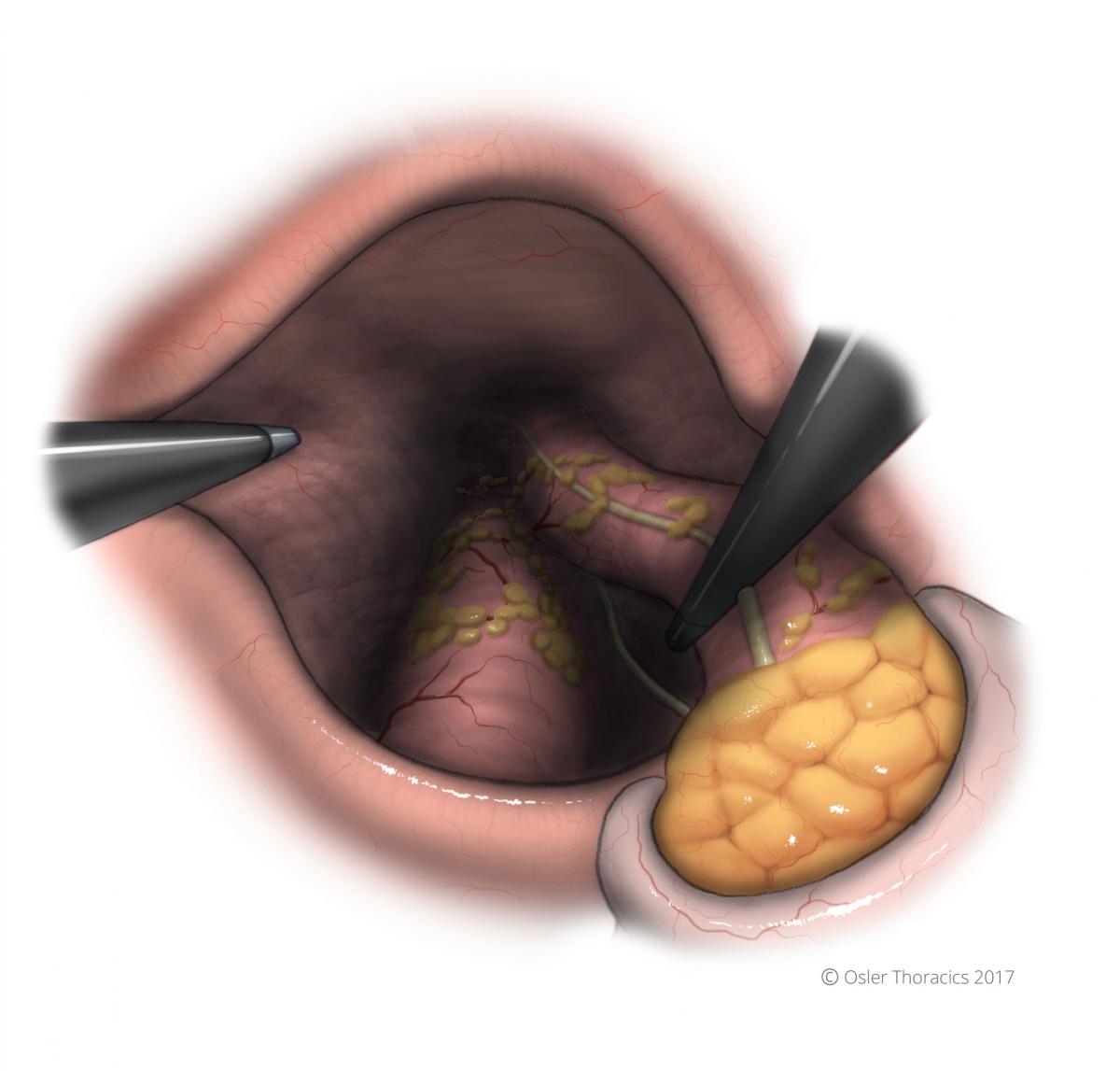 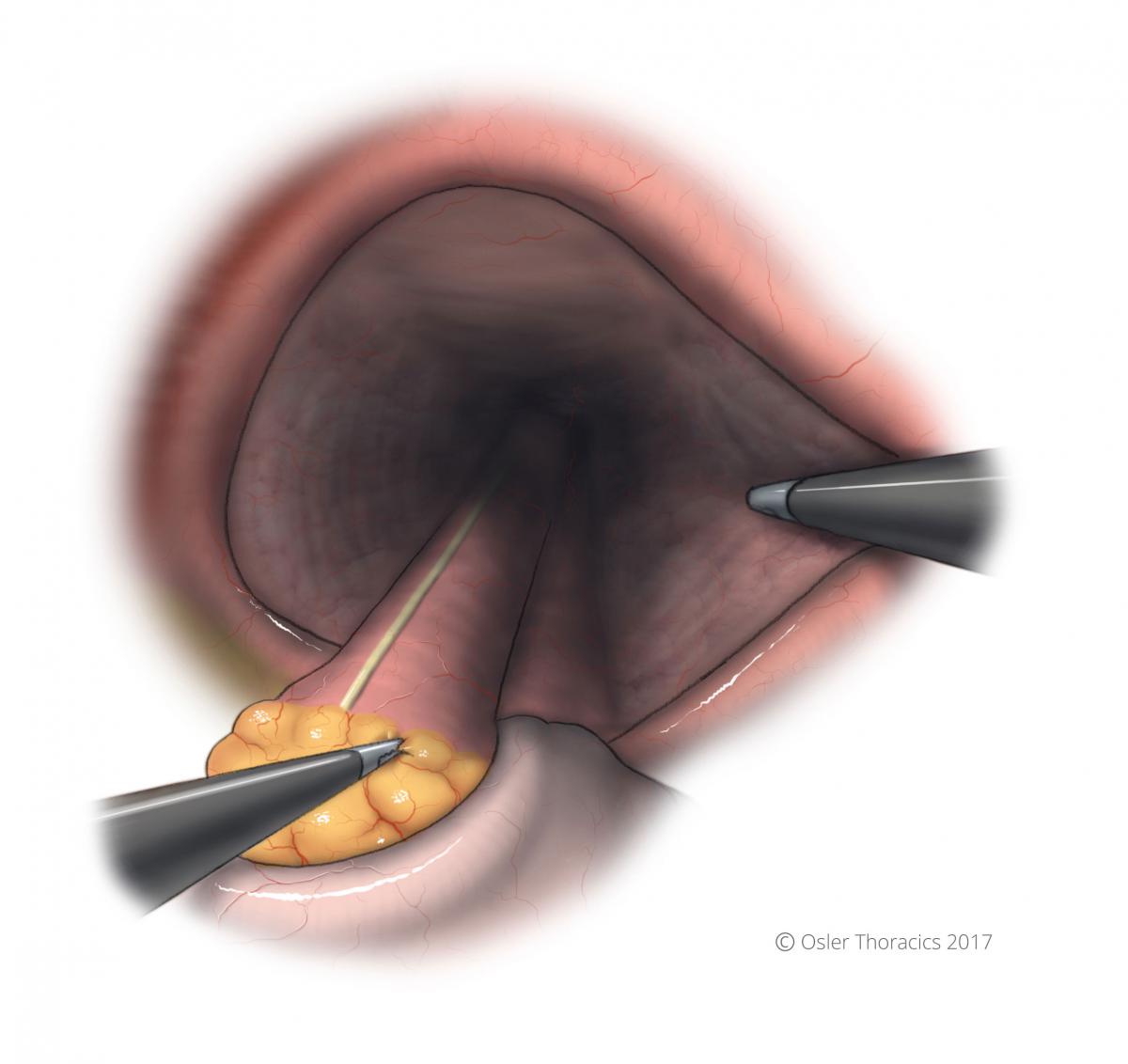 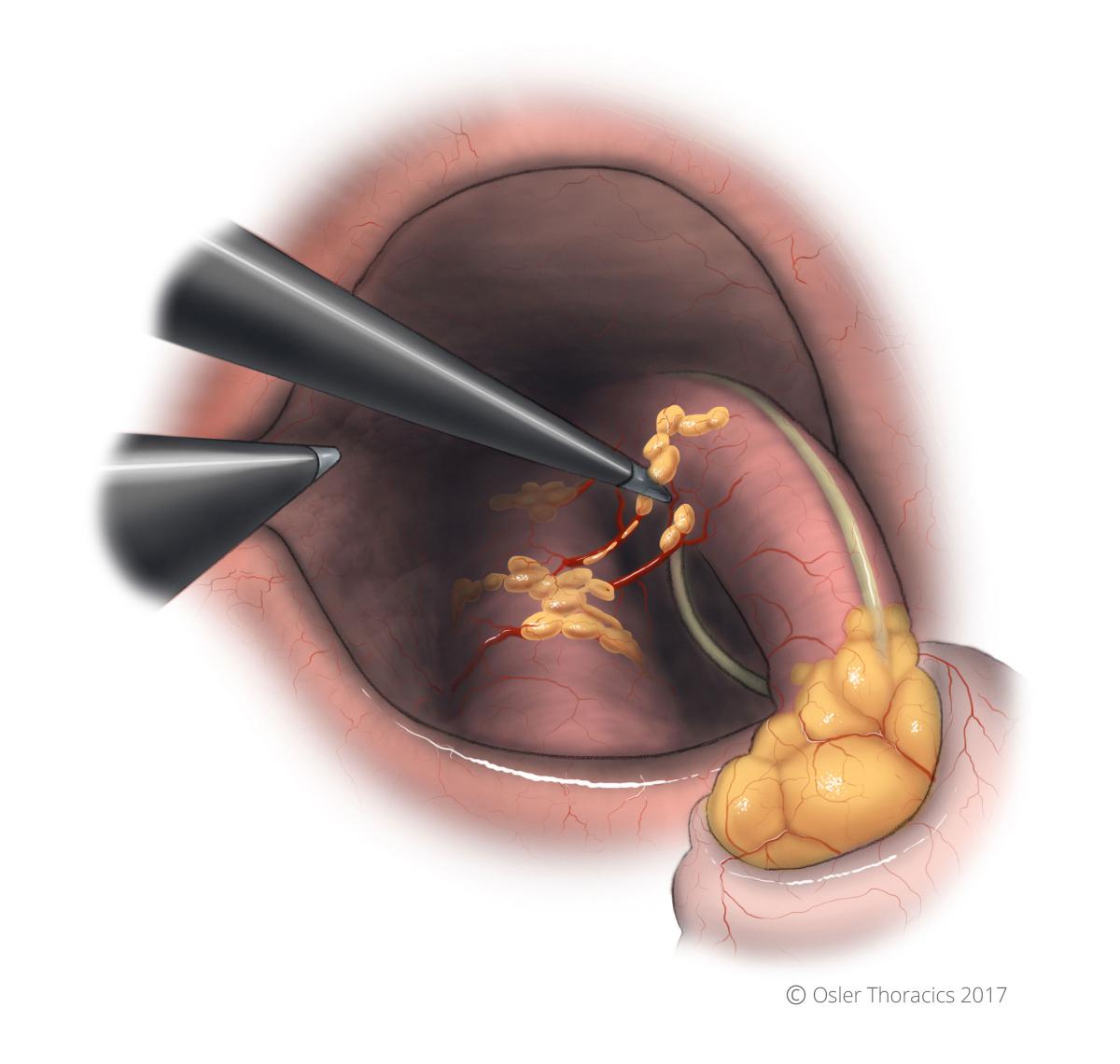 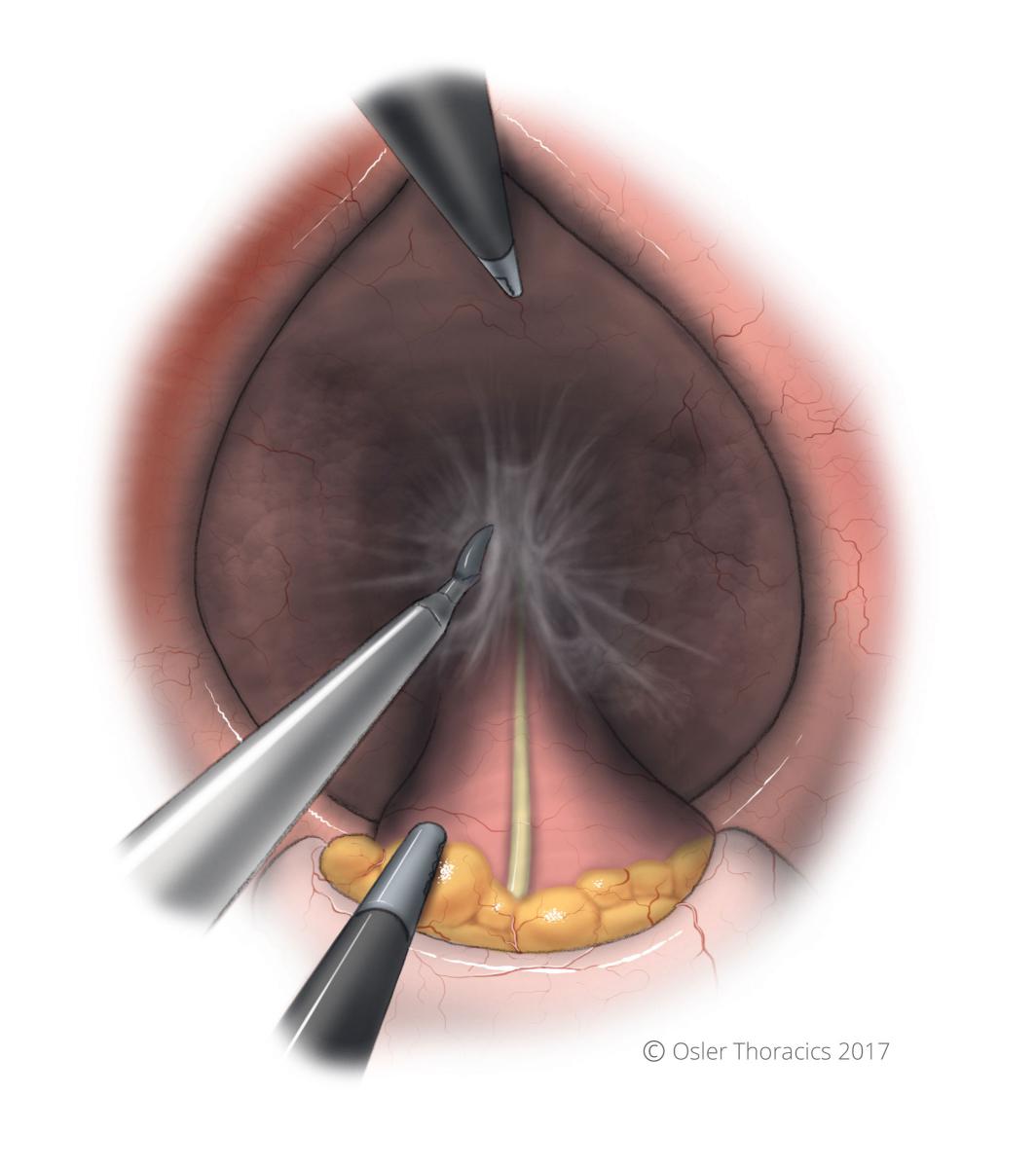 Pearl #3: Surgeon on the Left for Esophageal Mobilization

For a successful repair of the hiatus hernia, the surgeon needs to extensively release the esophagus from its mediastinal attachments. Ideally, 2-3 cm of esophagus must be intraabdominal. This reduced the upward pull on the stomach and recreates the pressure gradient at the GEJ that contributes to the lower esophageal pressure.

After mobilizing the esophagus as much as possible from the right side, more mobilization can be achieved by dissecting the esophagus with the surgeon moving to the left of the patient. Both the camera and the assistant will also move to the contralateral side. 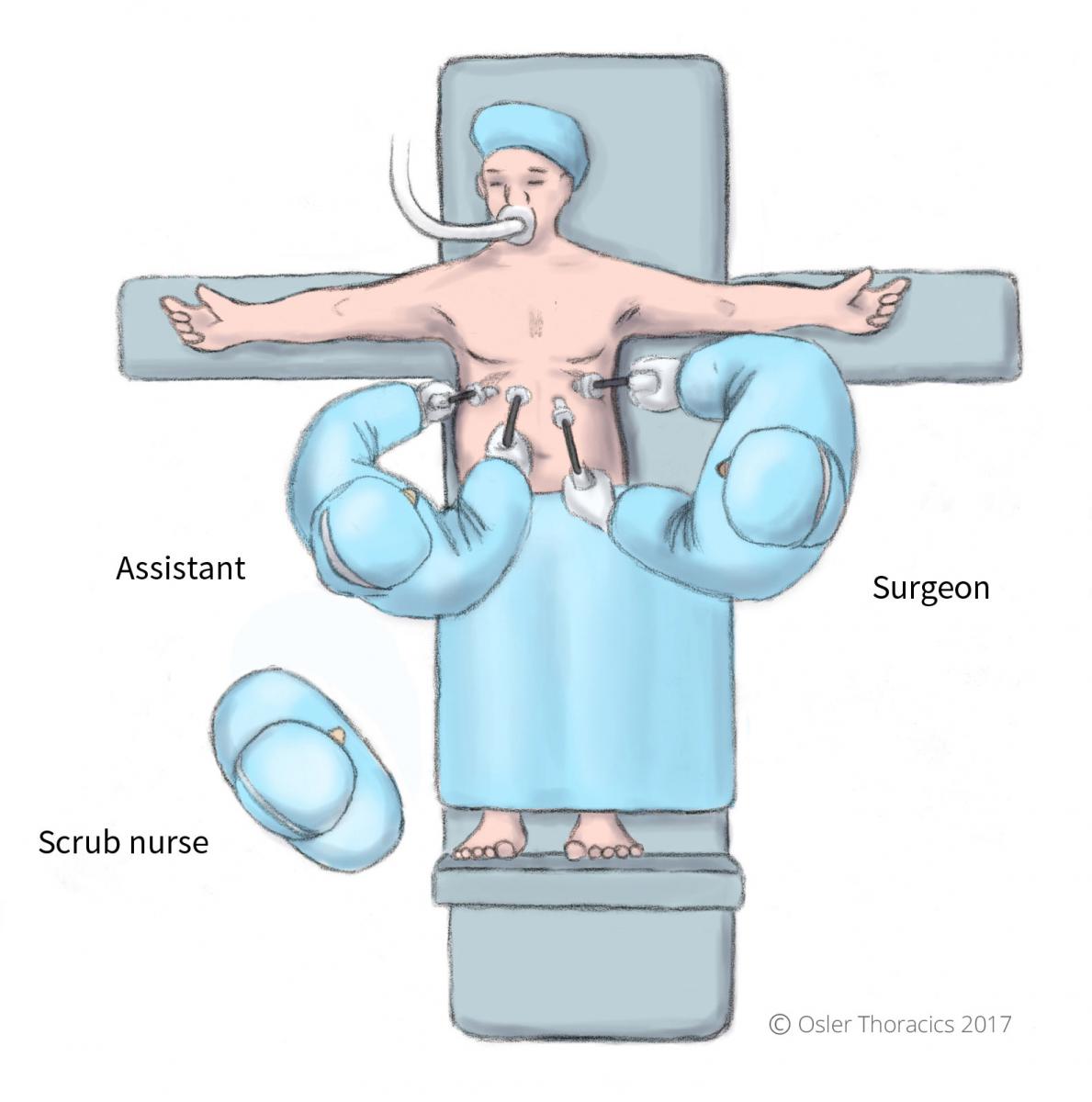 At Osler, we avoid using prosthetic meshes to repair the hiatus. We feel that over 90% can be primarily repaired with minimal tension.

Tension free closure of the crurae is critical for a successful repair.

Reduction of tension can be achieved by introducing air into the left pleural space. This can be achieved by placing a left pleural port and insufflating the chest. However, at Osler we make a small hole in the left pleura and allow air into the pleural space via the hiatus. Pleurotomy is now routine for us at is makes the crural closure much easier. We do not promote the use of a relaxing incision as it may result in phrenic nerve injury, eventration, and may result in a future diaphragmatic hernia. We use the following guidelines: 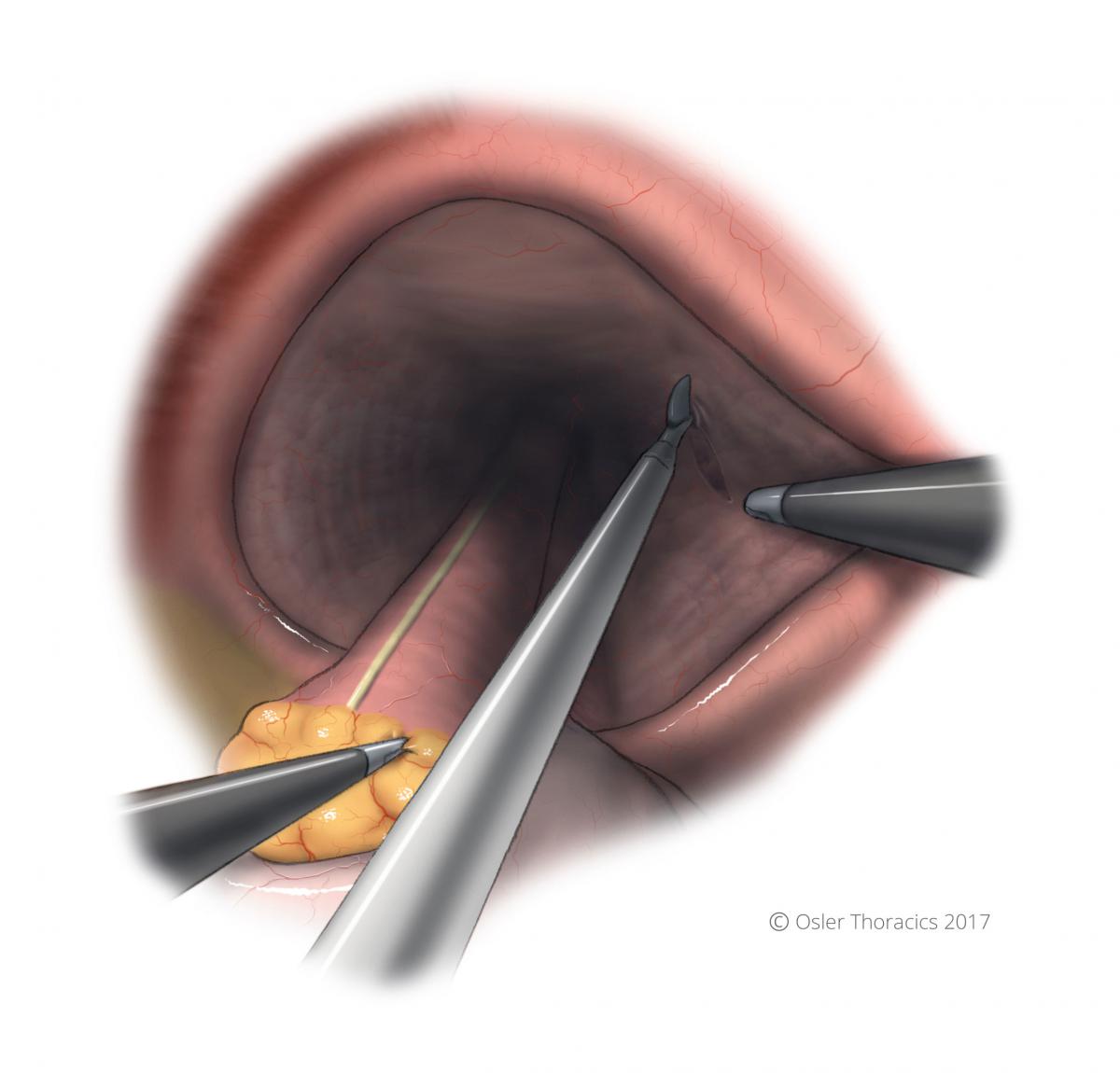 Frequently the left crura bows out significantly in patients with large hiatus hernias. The right crura is often thicker and maintains it’s vertical position. However, the left crura frequently become attenuated and bowed out laterally. In many crural repairs, 2-3 posterior stitches are adequate to close the hiatus. However, in those with large defects, placing more than 3 posterior sutures will create a “GEJ Shelf”. The multiple posterior stitches elevates the esophagus. After the hiatus, the GEJ drops posteriorly creating a partial mechanical obstruction leading to dysphagia. Instead of multiple posterior sutures, an anterior stitch can be considered, however a left cruroplasty can tighten the hiatus while maintaining the anatomic posterior location of the GEJ. These lateral sutures will also reduce the tension on the posterior repair. 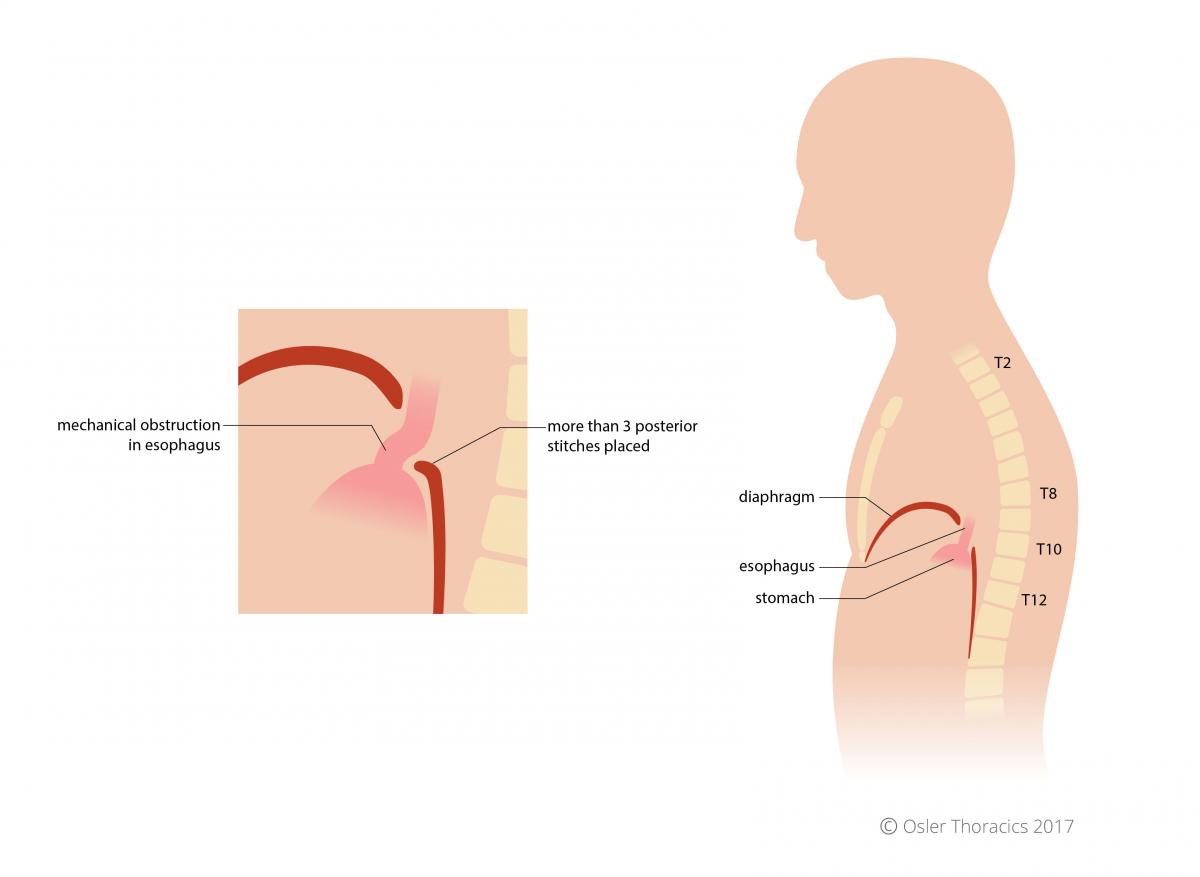 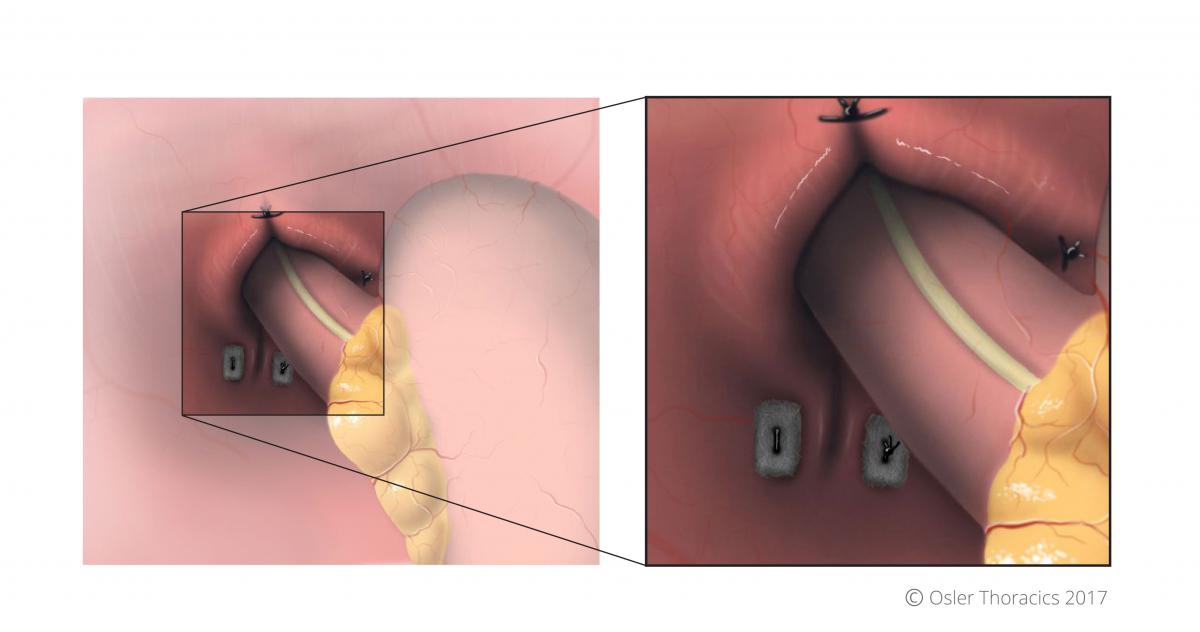 Especially in cases where the peritoneal lining of the crura is disrupted, we routinely use PTFE pledgets to reinforce the most posterior part of the crural repair. This mattress suture reinforces the strength of the repair and still maintains a distance from the esophageal wall, preventing future erosion. We will always place a second, more anterior stitch closer to the esophageal wall.

Although the gold standard repair of a large hiatus hernia includes a fundoplication, there is renewed interest in the gastropexy. At Osler, the method used to secure the stomach within the abdomen depends mostly on the patient’s preoperative symptoms.

Pexy is performed on those with obstructive symptoms: bloating, dysphagia, epigastric pain.

If a decision is made to proceed with a pexy, it is imperative that all other guidelines for a hiatus hernia repair are followed, including reduction of the sac, mobilization of the esophagus, and crural closure.

Technical aspects of a wrap: 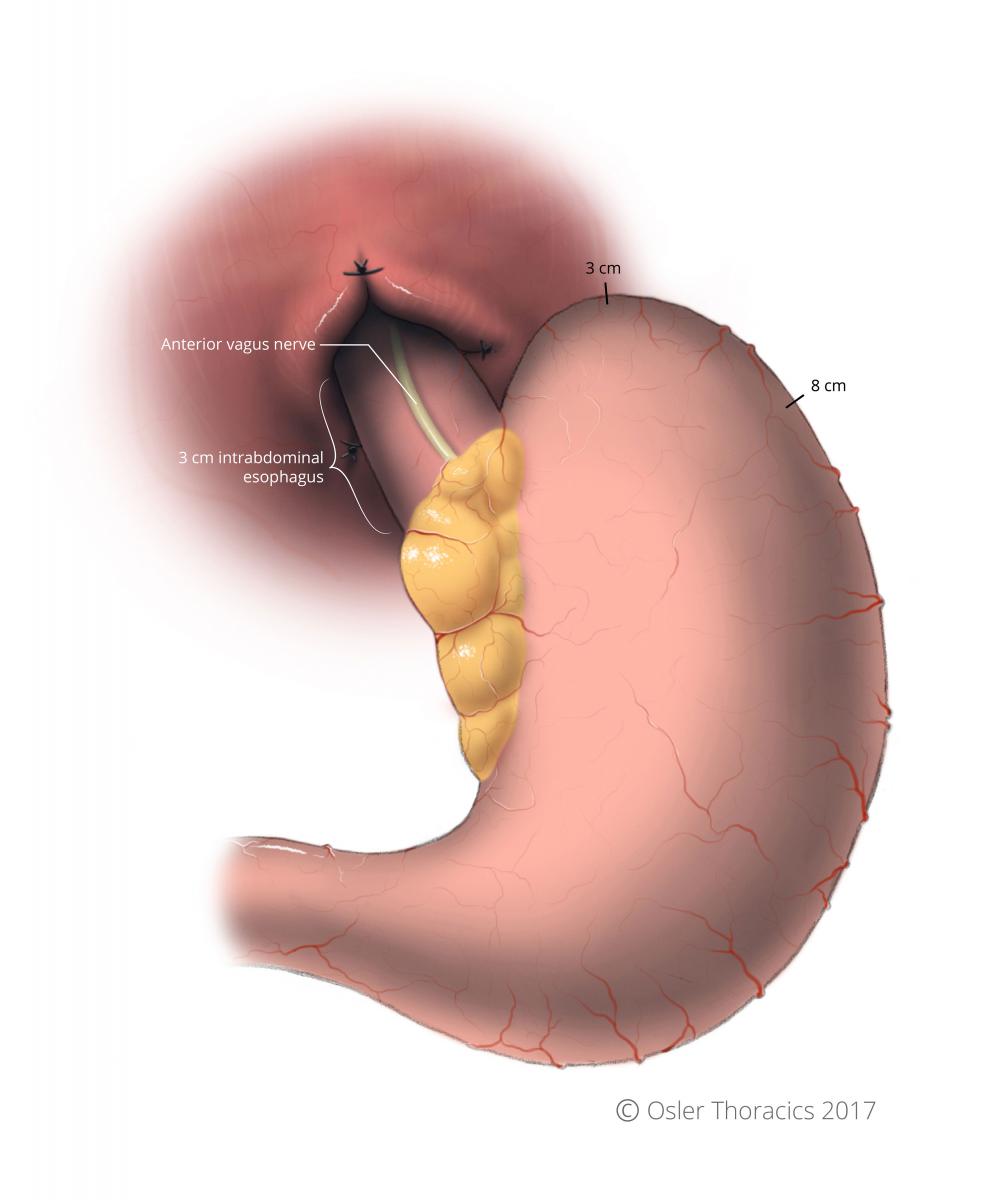 Figure 19: Reference points for fundoplication indicated, at 3cm and 8cm 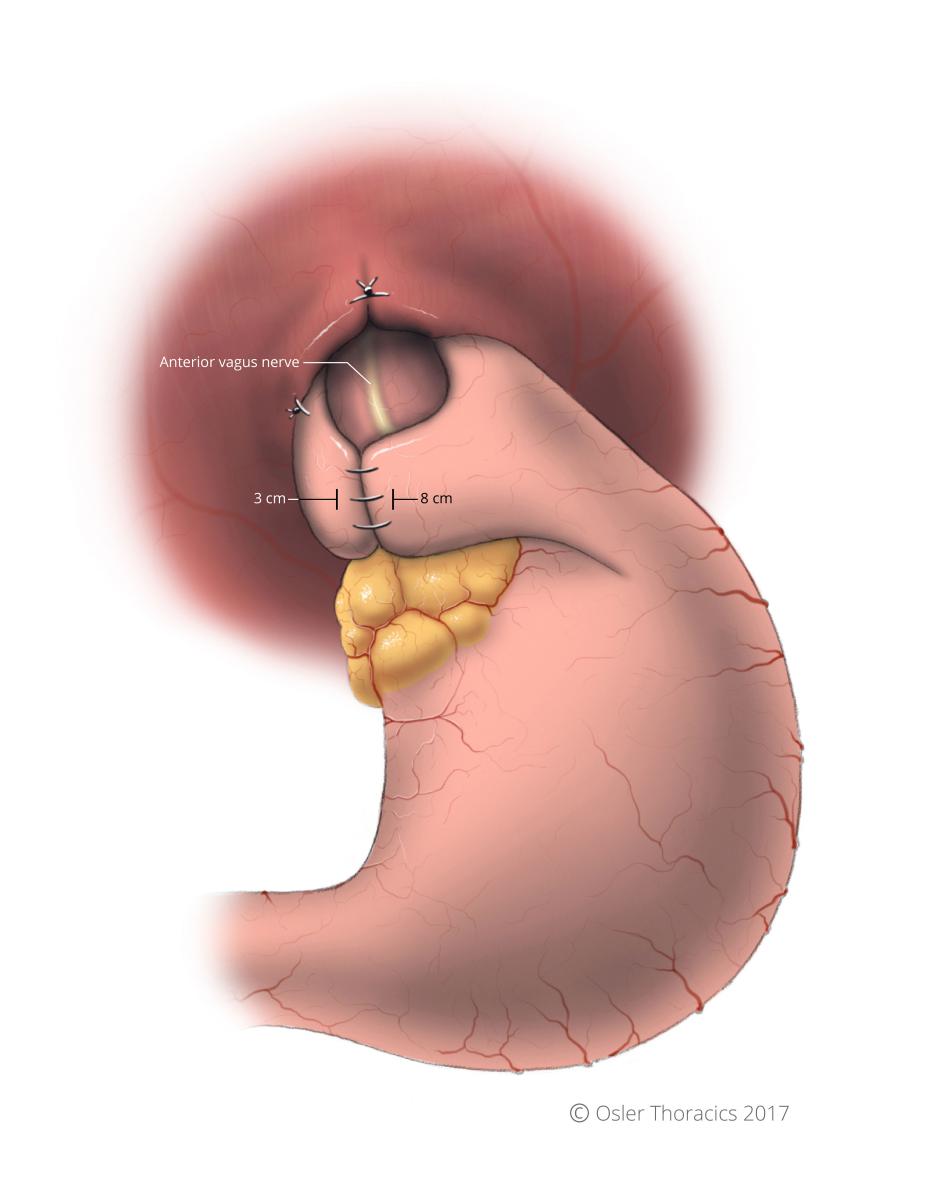 Technical aspects of a pexy: 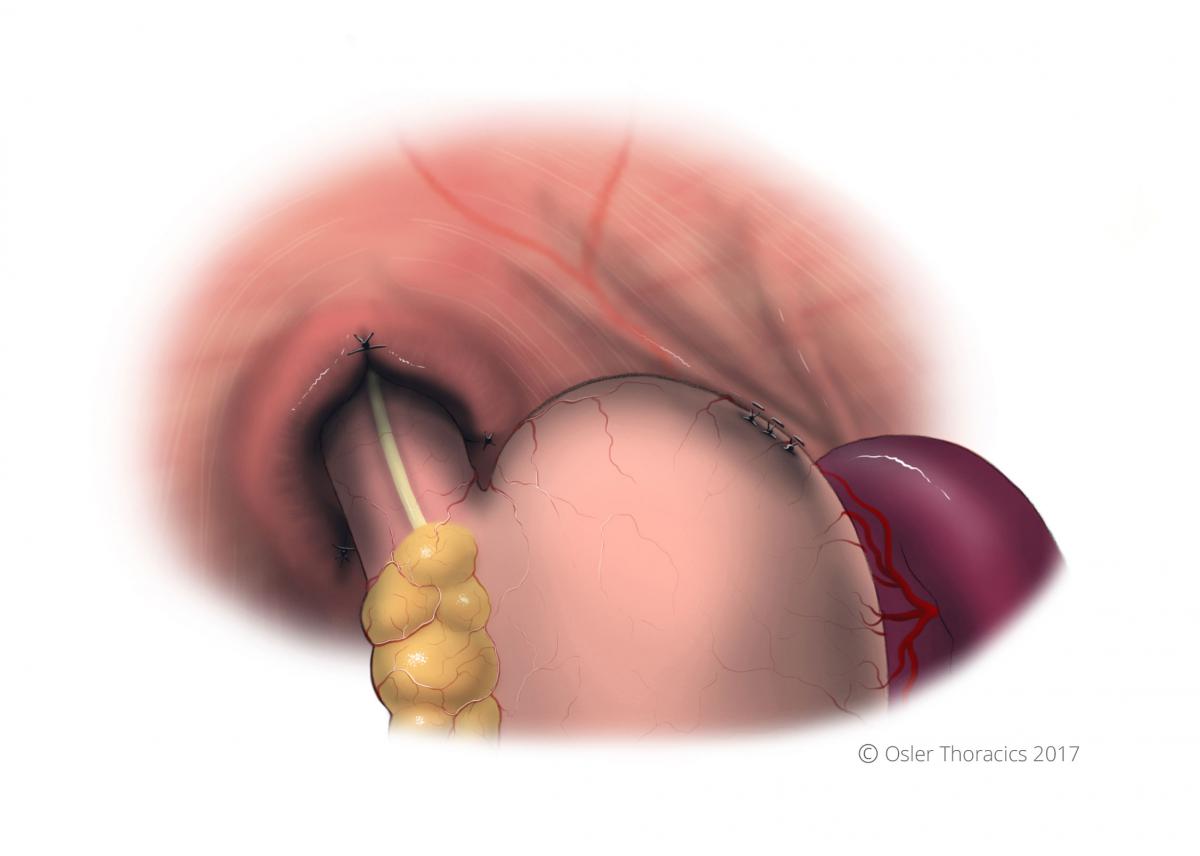 Figure 21: Completed pexy; notice the ‘floppy’ diaphragm as a results of introducing air into the pleural space 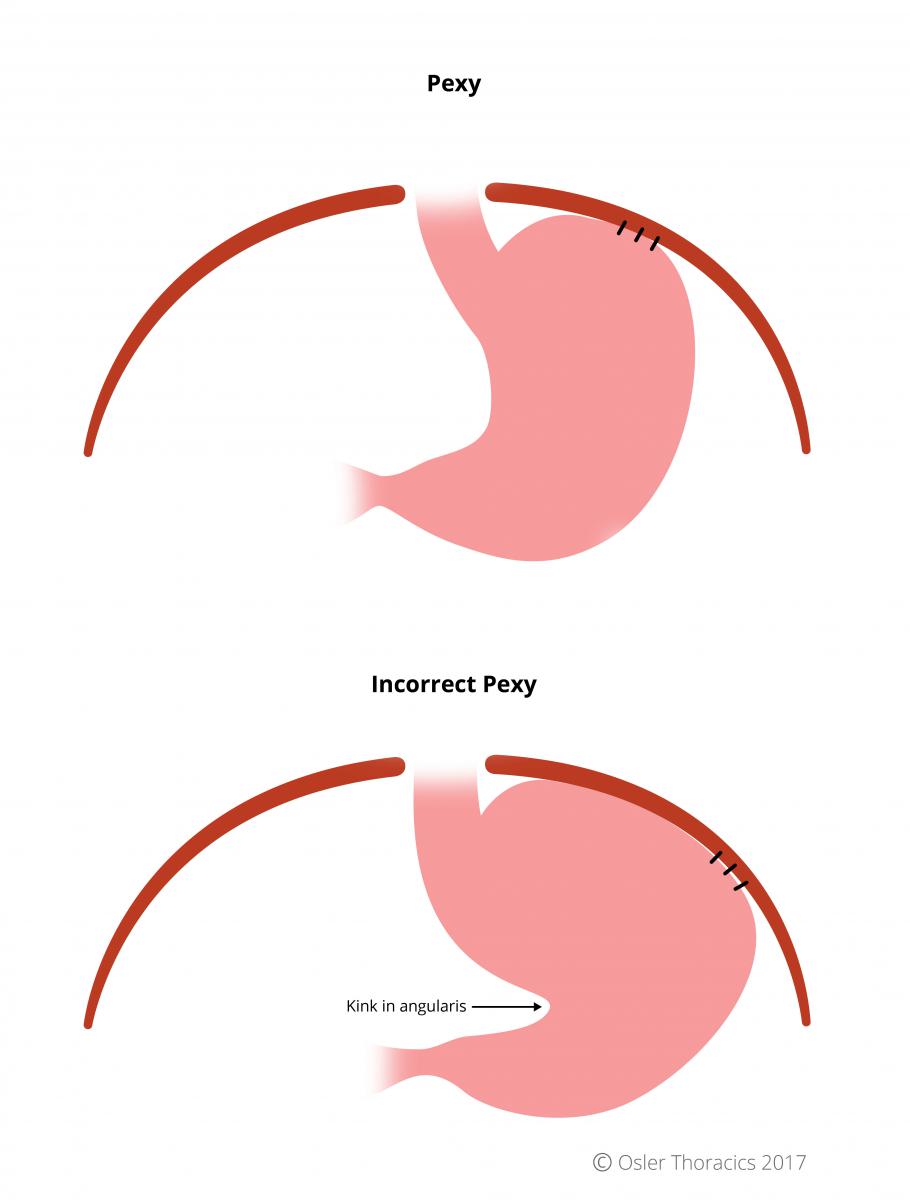 Figure 22: Incorrect pexy with stitches placed too later on diaphragm causes a kink in the angularis of the stomach

Pearl #8: Recognize the Tubularized Stomach Prior to Wrap or Pexy 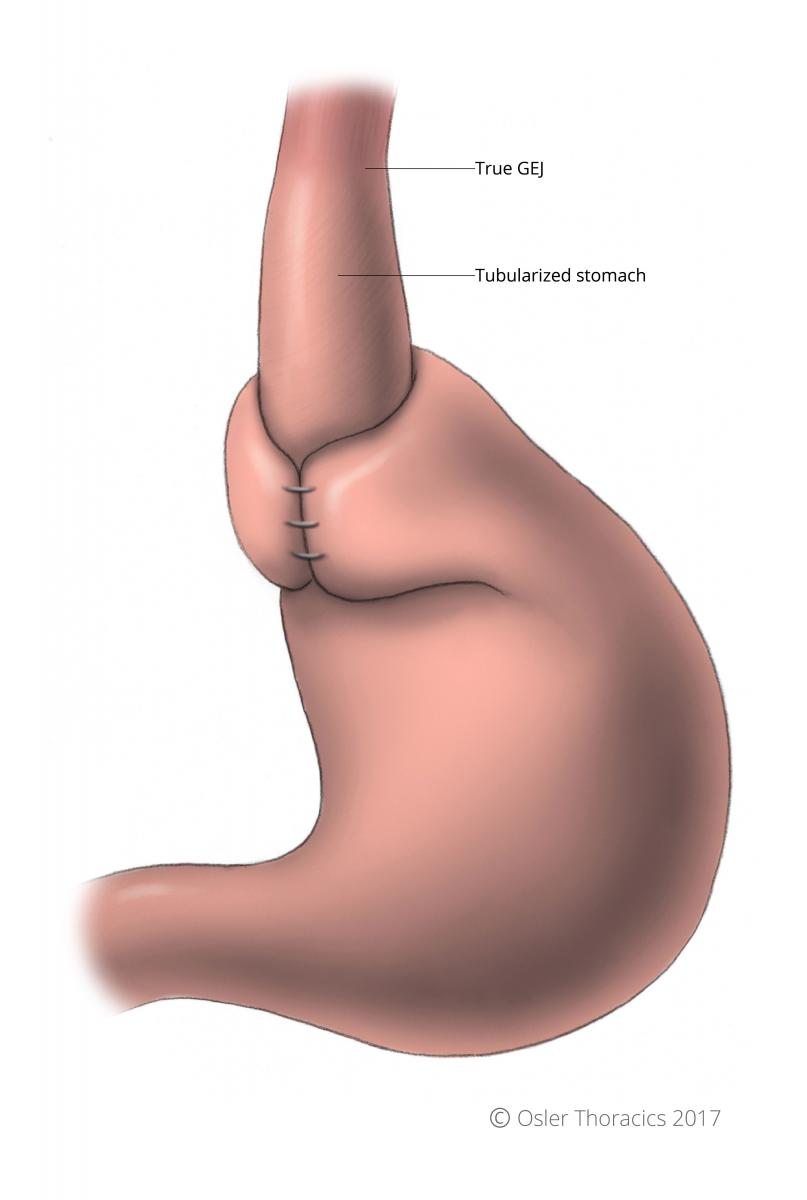 The goal in reducing the stomach into the abdomen is to also ensure 2-3 cm of intrabdominal esophagus. It is critical to consider that both an esophageal bougie and CO2 insufflation can give the illusion of adequate esophageal length. As mentioned above, adequate mediastinal mobilization can usually provide the length required. Assessing the true location of the GEJ is critical in deciding where to place the fundoplication.

With a chronically herniated gastric cardia, the extrinsic compression from the crurae creates a tubularized stomach, which can fool even the experienced surgeon. If this is not recognized, the wrap may be inadvertently placed around this tubularized stomach. This has been inappropriately labeled the “slipped Nissen”, as the wrap was actually surgically placed in the “slipped” position. Unfortunately, if this occurs, the wrap can create a whole new set of disabling symptoms. The physiology is similar to placing a tight gastric band around the stomach: dysphagia, bloating, epigastric pain, early satiety. But unlike the band, the wrap cannot be adjusted without re-do surgery.

It is therefore critical to identify the true GEJ. Dr. Luketich advises to reflect the GEJ fat pad towards the right of the GEJ. This is an excellent way to identify the anterior change in the muscle fibers. In his dissection, he mobilizes the anterior vagus nerve off anteriorly, as well as the posterior vagus nerve. He subsequently places the wrap between the mobilized nerves and the esophagus. Although this absolutely guarantees a well position wrap, it can be a bloody dissection and may also lead to unnecessary vagal nerve injury. 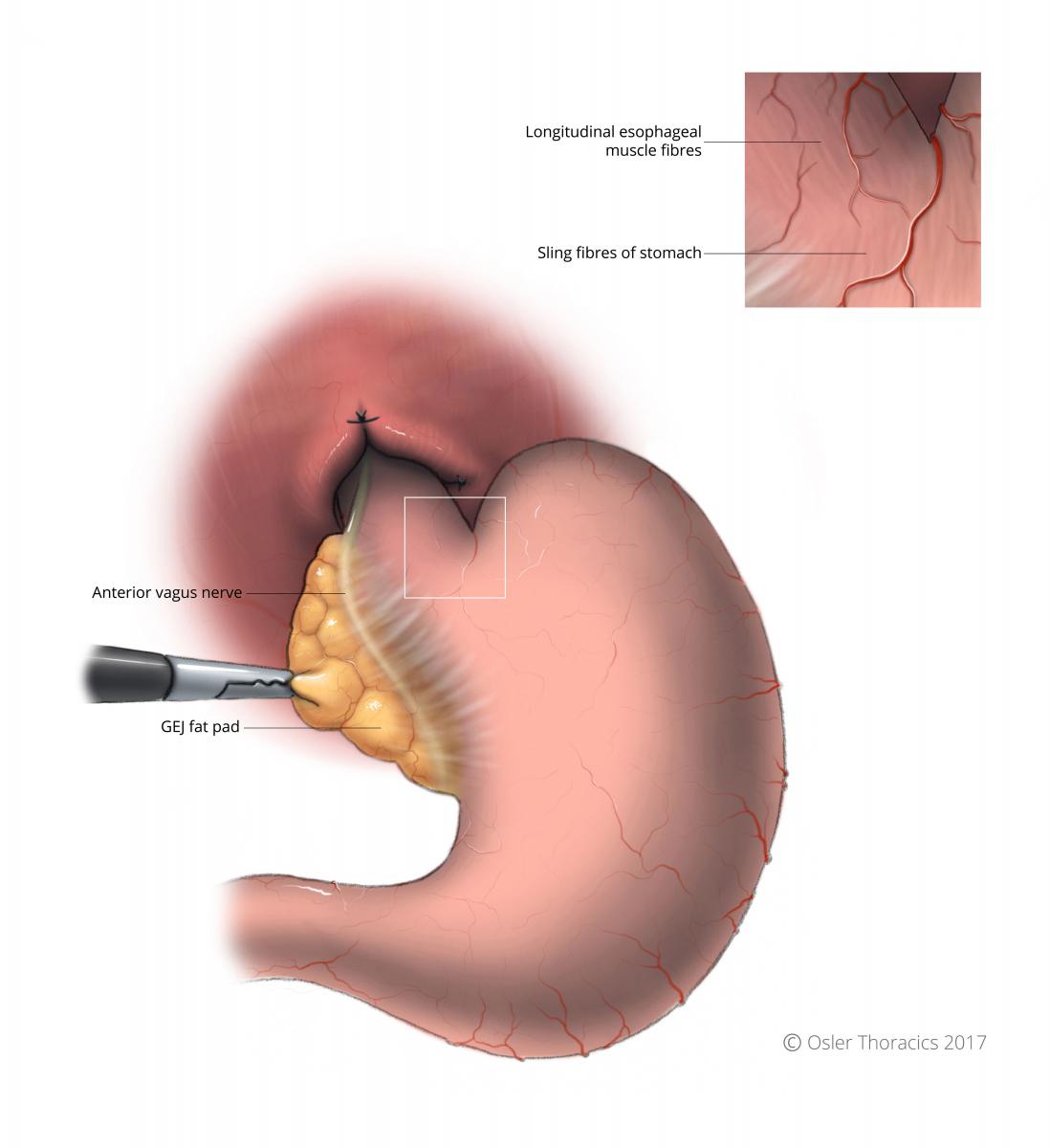 At Osler, we partially reflect the fat pad and vagus nerve to identify location where the longitudinal fibers of the esophagus intersect the sling fibers of the stomach. Not only will this clarify the true GEJ, it prevents incorporation of the anterior vagus nerve into the sutures of a fundoplication.